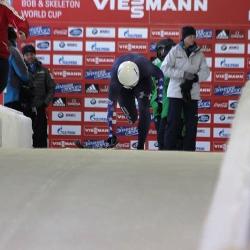 Alumnus Stephen Garbett is hoping to be one of the Gamecocks competing in the 2018 Olympics on the U.S. bobsled and skeleton.

When the U.S. athletes parade through the Olympic village this week in Sochi, Russia, you won’t find any Gamecocks on the team. Stephen Garbett hopes to change that in 2018 in South Korea.

The 2010 sport and entertainment management alumnus and skeleton competitor has been training day and night for the games since 2012. It’s a full-time job for Garbett, a member of the official U.S. bobsled and skeleton development team, and he’ll have to beat out other sliders in the country before advancing.

The Colorado native hasn’t been training to be a skeleton competitor his entire life, but he says his childhood daredevil tricks like pulling canoes behind trucks in the snow probably prepared him for the thrill of the slide.

“This reminds me of being a little kid and getting pulled behind a truck,” he says.

Garbett’s time at South Carolina also helped prepare him for the demanding schedule of being a professional athlete.

“USC really taught me to focus and taught me to work hard for what I truly believe in — to find those goals, set them and go for them,” he says.

Along with 23 other men and 22 women on the development team, Garbett trains and competes most of the year, so keeping a regular job is difficult. Most athletes work part-time in the restaurant industry during the offseason while maintaining a heavy training schedule, he says.

“You have to give up everything,” says Garbett, who relies on sponsors to fund his training. “That’s one of the hardest parts of doing this, giving up everything and being able to afford it.”

In a typical training day, Garbett wakes up at 6 a.m. for two to three hours of weight training and preparation for sliding. After sliding, there’s more training and sprint sessions throughout the day.

Then there’s eating — lots of eating. He’ll consume between 4,000 and 6,000 calories a day to put on weight and keep up with the exercise demands.

But skeleton is more than just a physical sport, he says. Garbett has been training his brain to deal with the mental requirements of the sport. The tracks are roughly a mile long with about a 400-foot vertical drop and multiple curves. Sliders can travel at speeds from 75 to 85 mph, experiencing forces up to six G's with their chins just one one inch from the ice.

“It’s very fast and it’s very fun, but it can be very painful,” he says. “My first run from the very top, I don’t know how to really explain it except that it was a blur. Your mind has never perceived things so fast. You aren’t able to process things at those speeds.”

Sliders have to train to think at the high-speeds, to react and steer with their shoulders and head, and to control the pressures they feel on the track.

In his most recent competition in the North America's Cup, Garbett took home second and fourth place at the track in Lake Placid, N.Y.

“I’m doing this because I really want to represent my country in the 2018 Olympics. I feel an honor being able to represent the U.S.,” he says. “I’m the brokest I’ve ever been in my life, but I’m the happiest”

Garbett is seeking sponsors. He can be found online and on social media.