Dancing all night — for the kids 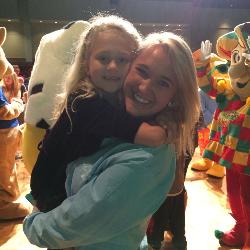 Dance Marathon is one of the largest student-run philanthropy events on campus, and senior Taylor Dietrich runs the show.

Taylor Dietrich discovered her love for Dance Marathon as a freshman. At first, it was just a booth during the annual Student Organization Fair, but an illness and hospital visit led Dietrich to see firsthand how important the University of South Carolina student-run philanthropy event is to Palmetto Health Children’s Hospital.

“I was very involved in high school, so coming here I was looking for a way to get involved,” says Dietrich, a senior public health major. “I just came across it. I saw ‘miracle’ and 'For The Kids,' and I thought these two things combined could be a great thing.”

Dietrich missed her first Dance Marathon, now in its 16th year at Carolina, when she was admitted to the children’s hospital for three days with a staph infection.

“I was on the other side,” she says. “Even though I didn’t go through what the other children do, I got to see what we work for, the care that the hospital provides.”

As a sophomore, Dietrich took her first step into the 24-hour event and never looked back. Now as a senior, she’s running the show, set for March 1-2 at the Strom Thurmond Wellness & Fitness Center, as overall director. That involves coordinating a board and a team of 106 students from across campus.

“We’re here to educate ourselves and form a future career, but we dedicate so much time to planning this event and the fundraising that goes along with it,” she says. “We just want to make a difference. Leading this group of students is a wonderful experience, to see us grow together and work toward one big goal.”

Since her involvement with the fastest growing student-run philanthropy sweeping the nation, Dietrich has decided to pursue a career with the national organization. She switched her major early from pharmacy to nursing to public health, where she says she feels she can make an impact. Dance Marathon, she says, is preparing her for what she wants to do when she graduates in May.

“It’s definitely something that I not only put a lot of effort into, but it’s something I want to continue doing,” she says. “I’m amazed at the impact that a college student can have and spread that across campus. It’s so much bigger than yourself.”

To date, the organization has raised more than $1.6 million for Palmetto Health Children's Hospital, Columbia's local Children’s Miracle Network Hospital. This year, with more than 900 dancers expected to participate and an expansion of local, high school minimarathons, the UofSC Dance Marathon is expected to set another record year.

“We don’t just dance. The point of a Dance Marathon isn’t the dancing. It’s about being there to raise funds and awareness,” Dietrich says. “The whole event is to celebrate the fundraising we’ve done throughout the year.”