Alumnus reflects on 50 years with 'J-school' 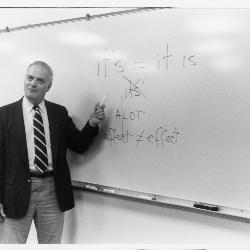 This week the School of Journalism and Mass Communications starts construction on its new home, leaving behind the Carolina Coliseum.

Henry Price has seen a lot of changes in more than 50 years at the University of South Carolina’s School of Journalism and Mass Communications.

He has been a student, a graduate student, an alumnus, a faculty member and even an interim dean. When he first joined the USC family as a student in 1955, the “J-school,” as the program has long been known, was in the Legare building on the Horseshoe.

In his years at Carolina, he has seen the growth of a bustling program, which expanded from just print journalism to five separate major tracks. He has seen the change and decline of print media. He has seen the university expand across downtown Columbia with the student body. But this week, he will see a day that has long been promised when the journalism school celebrates construction on its 21st century home. Price shared some of his memories of USC and the J-school.

On USC in 1955: At the time I came into the program, there were 90 journalism students. All of them print. There were no other offerings. When I came back for my master’s in 1963, there might have been 120 majors. It was an interesting place to be. Al Scroggins came in as dean in the mid-60s, and he’s the one who built the program.

On choosing journalism: I came here as an electrical engineering major and spent three semesters doing that before I saw the light and became a journalism student. See, I never worked for my high school newspaper. I never worked for The Gamecock. My calling for journalism came later when I came out of the Navy. I worked for The State newspaper while I was doing my master’s degree. Going to work for a newspaper was just a marvelous experience for me. It was just exciting.

On teaching: Teachers kind of live vicariously on the achievements of their students. You like to think that you had something to do with it. And perhaps in some cases you do, but the really good students – and there were and are a number of them – all you can say is that you don’t mess them up too badly while you’ve got them.

On journalism students: Most people coming into journalism, if they’re going to be successful at it, need to be driven people. They have to be nosy. The young people who come in, and I believe this is what sets them apart, they love to write. They want to make a contribution, at least that’s the sense I always got from most of them. They were ready for a challenge and you don’t find that in a lot of undergraduates. Young people came here and they came here to be journalism majors.

On technology: The computer changed the newspaper business. I never succumbed to it. The copy-editing class I taught for 30 some odd years was always paper and pencil. My thought on it was that it didn’t matter whether you were using a computer or paper and pencil, the skills were the same. I always figured I’d rather have them thinking about the skills of copy editing rather than concentrating on learning the computer.

On teaching the toughest copy editing class: The editing class was a very demanding class, and it was done with malice aforethought. I knew what the business was going to demand of them, and I wanted them ready. We were preparing people for a professional career.

On the new, old building — the Coliseum: The Coliseum was not built for the journalism program. I know the broadcast people had a terrible time in the studio because the ceilings were low and they couldn’t fit in the right lighting. The Coliseum was not built for a program like journalism. But it was new quarters and we desperately needed them. Legare just didn’t work anymore. Everything was brand new down there.

On always “moving,” but never moving: The talk about a new building probably began to get serious around the late '70s, early '80s. There was great enthusiasm for it, and everyone was extraordinarily optimistic. Then there were disappointments and disappointments on a new building. We really needed it. The size of the student body had gotten to the point where we had outgrown the facilities. I think the college did extremely well to keep moving ahead in quality, while dealing with a facility that was not designed for them and really didn’t have the things that they needed. So I’m excited about finally someone getting this thing to go through.

On the new home for the school: In my opinion, rather than a broadcasting area and a print area, it ought to just be news. And students ought to be able to move among the different areas. Graduates should be able to move from one industry to the other, and I think this new program is going to do exactly that. The Coliseum wasn’t equipped for that. I see great prospects. These new facilities are going to give them an extra boost. I think that they are taking what’s going on now and looking into the future. The graduates will come out even better prepared than they are now because the opportunities will be there, the technology will be there.