As a Gamecock, my determination has No Limits 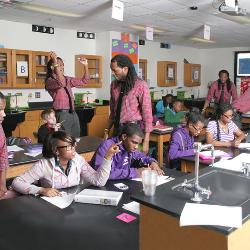 UofSC grad is always on the move.

Justin Dunham is always moving. A former high school athlete, he’s conditioned to make quick turns, think on his feet and motivate. One minute he’s in the front of the classroom, the next he’s in the back. A few seconds later, he’s tossing a football to a kid anxious to give an answer. Justin’s Earth Science classes spin with energy, and the kids don’t miss a beat.

Controlled chaos is the norm for this University of South Carolina graduate and his young scholars. He expects full engagement. And they give it right back. “I believe the kids are excited about learning because I’m excited about teaching,” he says. And the eighth-graders jump at the chance to share their new knowledge of climate conditions, ocean tides and seismic waves.

Hands-on demonstrations, art, games, puzzles and sports analogies permeate his lessons. And after a full day of pacing the classroom, standing in chairs and showing the differences between primary, secondary and surface waves with one-on-one basketball moves, Justin is tired. “But it’s a good type of exhaustion,” he says. “I leave nothing on the table. If I’m not tired at the end of the day, then I didn’t do enough.”

In high school, Justin played basketball, ran track and attempted football. “I was too small for football,” he admits. But he’s conditioned for endurance. And his enthusiasm for learning and teaching is no accident. Raised in the Pee Dee area by a single mother, there were no frills. But his mother raised a family of readers.

“We didn’t have a lot,” he recalls, “but we had books. Reading was important to my mother. As a kid, I loved Harry Potter. I remember I sat in the hot car reading Harry Potter while my mom was shopping. She was gone for a long time, like two hours. But I sat sweating in the car the entire time. When she came back to the car, she was like what in the world is going on? ‘Aren’t you hot?’ she asked. I was so deep into the book I didn’t realize how hot the car was and how much I was sweating. I want my students to have the same eagerness for knowledge.”

Gravity, biological diversity and geologic landforms aren’t the only concepts Justin demonstrates in class. He also encourages civility. “I want them to understand what it means to be a good person, to be respectful,” he states. “I always call my students by their first and last names or address them as ‘Mr.’ or ‘Ms.’ And I make sure they think about their appearance. I often remind the young men to pull their pants up and to tuck in their shirts. These little things will make a big difference when they are older.”

At Carolina, Justin discovered a passion for community service, first as a member of Alpha Phi Alpha, an African-American fraternity that encourages service to others, then as a community service intern in Student Life, where he coordinated service projects for students.

During the internship, he organized a campus literary forum. One of the guest speakers was Josh Bell, executive director of Teach for America of South Carolina. During the presentation, Justin discovered that just 50 percent of Hispanic and African-American students in rural South Carolina graduate from high school, and the Corridor of Shame, a stretch of small rural communities along Interstate 95, has some of the lowest student achievement rates in the state.

After the presentation, Justin knew he wanted to make a difference, especially in his own backyard. “I was ignited to do something. I applied to Teach for America and was accepted into the program. I was even more excited to get an assignment in Darlington County. It’s an opportunity to come home and give back,” he says.

“Justin brings such incredible energy to his work in Darlington,” says Josh Bell, executive director of Teach for America of South Carolina. “He believes deeply in his students, sees his own story in theirs and demonstrates this every day by empowering them to learn and excel, whatever barriers they might face. Our state is fortunate to have local leaders like him stepping up to inspire and engage our students.”

It’s going to take a lot to improve education in the state’s most rural communities, and Justin isn’t wasting any time doing his part. His sense of urgency keeps his students on their toes because they know their teacher will never sit down on the job.

Justin Dunham is teaching in Darlington County through Teach for America South Carolina.