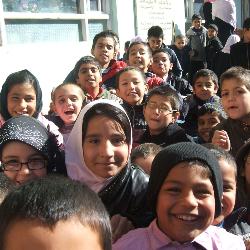 The faces of conflict

An alumnus puts his counseling skills to work in war-torn Afghanistan.

Most American civilians aren’t looking for reasons to go to Iraq and Afghanistan these days. But Ronald Bradley hasn’t let war zone dangers stop him from trying to make a big difference in the lives of little students there.

Several times since 2010, Bradley has taken leave from his job as a hospice care chaplain to travel into the heart of both countries as a volunteer. There he’s provided guidance and counseling in schools for several weeks at a time.

“What could I do to express volunteerism and patriotism in the wake of 9/11? I thought the best thing I could do is try to use my skills and try to help build some bridges to different cultures,” said Bradley, who earned bachelor’s and master’s degrees from USC in 1973 and 1975, respectively.

On his second trip, Bradley traveled with Afghans for Tomorrow to a school in Kabul where he counseled students and teachers on managing stress. It was a way for him to put his master’s of education in guidance and counseling to work.

“There are no guidance counselors in the schools over there. They have nobody,” he said. “So it’s anything that you can do to support them, and they are really grateful.”

Bradley, who works in the Myrtle Beach, S.C., area, said he hopes to return to the region despite the dangers.

“My first trip was a novelty. I was excited about everything. It was all new,” he said. “This time it was more sad because of a real concern about some of these girls and trying to help them have some hope for the future.”

Ron Bradley's story of volunteerism in two war zones is among several alumni features in the spring 2014 edition of Carolinian, Carolina's award-winning alumni magazine. Visit the My Carolina Alumni Association or Carolina's Promise to become a subscriber.