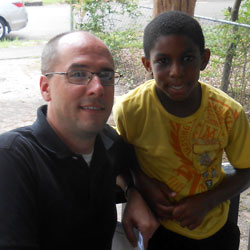 Michael Gibbs Hill didn’t get involved with community service as a college student. Mentoring local children was something he discovered when he came to the University of South Carolina in 2007 as a faculty member. Now, as a Big Brother with Big Brothers Big Sisters of Greater Columbia, he thinks more Gamecocks should get involved.

Hill, an associate professor of Chinese language, literature and culture, began helping in the local community through the Midlands Reading Consortium, a volunteer tutoring program with the United Way of the Midlands for elementary-aged children. For 30 minutes a week, he would read with a first- or second-grade student.

“We had established a relationship together where we’d read and have fun,” he says. “We’d made some progress on his reading. I thought this match would be a great idea.”

Now the two do a lot more than read, taking trips beyond the children’s library to Columbia’s Riverbanks Zoo, EdVenture Children’s Museum or just taking Hill’s dog for a walk and playing checkers.

“Part of my decision to do this was finding ways to get involved in the community beyond USC, and doing community service and volunteer work is one way to make that happen,” he says. “It’s shown me a different side of life in Columbia.”

Hill’s even noticed an impact on his teaching at Carolina.

“Working on reading with first- and second-graders sometimes helps me teach Chinese,” he says. “Part of it is confidence, and sometimes college students just need a little confidence, too.”

Several other faculty and staff members and students on campus are involved with the local Big Brothers Big Sisters program and participating n the agency’s annual Bowl for Kids’ Sake fundraiser this weekend.  Six USC teams are participating in the event.

Whether it’s competing for a fundraiser or giving an hour a week to help Columbia’s children, Hill hopes students – and faculty and staff – can learn from him. Don’t wait to get involved, he says.

“It’s meaningful to try to bring some additional opportunities to children in our community,” he says. “Get involved as early as you can.”