2014 Outstanding Woman of the Year 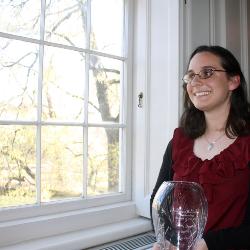 Outstanding Woman of the Year

The University of South Carolina names Emily Learner the 2014 Outstanding Woman of the Year.

“I think being a woman at USC has shaped my perspective on the importance of being an active leader on campus,” the exercise science senior from Columbia says. “I realize how much there is a need to have women who are proud of who they are and what they have accomplished to be role models for other women and girls.”

Learner has joined the ranks of role model as she was named 2014’s Outstanding Woman of the Year at the University of South Carolina.

Learner is a member of the South Carolina Honors College, Phi Beta Kappa honor society and a recipient of the President’s Volunteer Service Award. She has been an active volunteer on campus, including with Cocky’s Reading Express, and in the community through her church.

She also has been a Magellan Scholar, using her award to conduct her own study looking at the role of resveratrol in reducing inflammation in the mice with muscular dystrophy.

“Through my interactions as a Magellan Ambassador, I have shared my passion for research and encouraged all students to make a difference through research in their field,” Learner says.

She chose her field in part because of her own experiences as a youngster.

"During high school, I had four knee surgeries, so I had to go to physical therapy a lot," Learner says. "Coming into USC I thought that physical therapy was the line I was meant to be going down, so I took exercise science and I loved my major and I continue to love my major."

Learner is considering becoming a teacher or furthering her studies in exercise and rehabilitation science after graduating in May.

She says she was really shocked to be named the Outstanding Woman of the Year given the accomplishments of all the finalists, including her best friend and roommate, Leila Heidari, a senior health major from Columbia, who also was the person who nominated Learner for the award.

To be eligible for Outstanding Woman of the Year, candidates must be undergraduate students with at least 60 credit hours, have attended Carolina for at least one semester and have a cumulative grade point average of at least 3.0.

The award committee also considers academic achievements and awards, campus and community involvement and service and contributions to the university and to other women as well as other extracurricular activities.

Students submit a resume and two short essays that are reviewed by a screening committee. Finalists participate in an interview process to determine the recipient.