Creating the next generation of social media 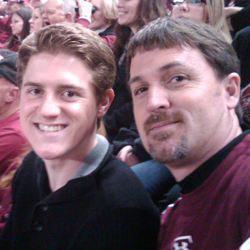 The promotion at work you’ve been waiting for has just been announced, and now you want to gather as many friends as possible for a quick celebratory lunch.

It’s the brainchild of Joshua and Paul Norris, who have been working nonstop on their pet project in hopes that it will become a game-changer among the more than 1 million apps available through Apple and Google stores.

“The technology of traditional social networking of the past decade has revolved around text and photos, answering what people did or thought or said,” said Joshua Norris, a 2013 Honors College graduate who majored in biology, minored in economics and studio art and turned the development of Rubeyes into his honors thesis. “With the next evolution, social networking will revolve around where people are right now, what they are planning to do and their habits.”

And that is exactly what the Norrises created Rubeyes to do. The app’s functions are built around GPS location technology to connect people in real time. Here’s how it works: After you’ve downloaded the app and shared friend requests, Rubeyes notifies you when someone you care about is nearby, allowing you the opportunity to interact in person if you want.

Users also can select map zones so they’re notified when, for example, a child arrives at home or a colleague is at a favorite restaurant. Privacy concerns are addressed through functions on the app that allow users to plug in only when they want to and to be “invisible” at any time.

Rubeyes users can also quickly create a “meet” — whether it’s a formal gathering, a spontaneous drinks-after-work or a meet-up at a game — by inviting selected friends from their list. All of the information communicated through Rubeyes is automatically pushed to the user; there’s no need to constantly check a phone screen for alerts, Norris said.

“Social media programs need to stop seeking to answer what people have been doing or where they were or even where they are right now,” Norris said. “They need to begin trying to answer where people are going, who they will be with and what they are going to be doing. Social living is done on the move, not spent looking down at a phone or computer screen, and that’s one of the functionalities we built into Rubeyes.”

The app’s ability to help users keep up with multiple people simultaneously as well as its other functions required nearly 100 detailed screen sketches and more than 1,000 pages of Word documents. Ultimately, teams of programmers in Austin, Texas, developed and built the program to the Norrises’ specifications.

“A typical app sees 100 users as 100 data points. With Rubeyes, it’s 100-squared because we are not only looking at the user, but that user’s relationship with 99 other users, all in real time continuously,” said Paul Norris, a 1987 mechanical engineering graduate of the university who has launched and sold several businesses and devoted his full-time efforts to developing Rubeyes in the past three years. “The back office database and algorithm necessary to make sense out of this is very complex, and it has to work very efficiently to provide useable functionality to the end user.”

Now that the app has launched, the Norrises are watching the number of users grow weekly while thinking about how to keep Rubeyes on the cutting edge of social media technology.

“I believe technology has made us more socially connected than ever before, but it has also made us more emotionally disconnected,” Paul Norris said. “This is the real story of Rubeyes — its ability to help address this social void. We could all use an extra friendly face in our lives every day.”