Finding a place in the world 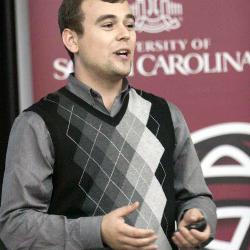 Andrew Kovtun is all over the place: Paris, Prague, Cleveland, Columbia. And it's all with his eyes on the prize of one day becoming a U.S. Foreign Service officer.

Andrew Kovtun is spending his second semester abroad in Paris and has two international gigs lined up for this summer. He also is hoping to spend next year in Europe learning Czech, which may postpone his graduation from the University of South Carolina, where he is triple-majoring in international business, economics and marketing with minors in French and Russian.

But don’t believe for a minute the WUSC disc jockey, whose talk show mixes discussion of international politics with electronic dance music, is suffering from wanderlust. He is working quite diligently toward one goal: to be a U.S. Foreign Service officer.

“I always knew that I loved social studies, but I never knew exactly where that would lead me,” says Kovtun, who is currently taking classes in international security, contemporary Russian studies and development economics at the Paris Institute of Political Studies.

“The summer before my senior year of high school, I went on an international relations summer program and just the caliber of the other students that I interacted with, and the type of professors, activities, simulations that we did, I immediately knew that this was the kind of work that I wanted to do for the rest of my life,” he says.

So the Cleveland, Ohio, native set his sights on finding in international program that could position him for his dream job. He chose Carolina for its top-ranked international business program, the McNair Scholarship and, well, the weather.

“When I flew in at the end of February, everything was blooming while we had like a foot of snow in Cleveland, it definitely did give me a great impression,” he says.

“The reason I love being at USC is that all of these opportunities are possible.”

Kovtun also has a natural interest in international affairs. His parents are from Kiev and his grandmother still lives there. So the political upheaval in Ukraine has captured his attention.

“Right now, things in Kiev are rather calm after the new government has come into place,” Kovtun says. “I’m not sure if it’s calm because it’s calm right before the storm hits or if things will remain this way.

“It’s really uncertain at this point.”

After graduating from Carolina next year or the year after, Kovtun plans to continue his education in international studies and law before applying to be an economic officer with the Foreign Service.

“That means being the liaison for economic treaties between countries, improving business relations and investment between the U.S. and the country where I will be serving,” Kovtun says. “It means assisting companies in that country to allow them to invest into the U.S. economy or providing aid, if it’s in undeveloped countries or certain poor sectors.”

Kovtun will be back in the U.S. briefly this spring to interview to be a Truman Scholar. He is one of three UofSC students up for the prestigious honor this year.

“Being a Truman Scholar would be one of the largest honors someone could receive, especially with my plan of going into the public sector,” Kovtun says. “It’s usually limited to one or two scholars per state, so it’s almost like being a representative of the state that you come from.

“It would really provide me with the background experience I would need to be the best representative of the U.S. when I finally enter into the Foreign Service.”

Andrew Kovtun is just one of our Truman Scholar finalists. Read about Davontae Singleton and Andrea Eggleston and learn how you can help support outstanding students like these by visiting Carolina's Promise.