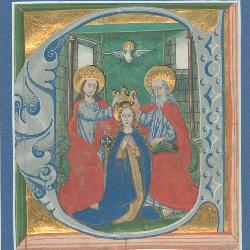 Shining light on the blues

Freshman Adam Glenn is analyzing the composition of blue pigments in three illuminated manuscripts from the late 1400s, from Germany, Italy and France.

Adam Glenn may be majoring in chemical engineering, but that hasn’t stopped the freshman from jumping into a research project with humanities written all over it.

The project involves some of the University of South Carolina’s most precious historical artifacts, illuminated manuscripts dating from the medieval era. His advisers, English professor Scott Gwara and chemistry professor Steve Morgan, work in very different branches of the academy, and the combination of their expertise is opening new vistas for historical insight.

“People are trying to understand the technology of book production, which was scientifically based,” says Gwara. “I like it because we’re able to ask completely different questions, questions you couldn’t ask before.”

Illuminated manuscripts were produced in Europe beginning in Roman times, with early surviving examples dating from about the fifth century A.D. Hand-lettered text is augmented by hand-drawn images that are “illuminated” with rich colors, derived from pure gold gilt and a variety of pigments.

The sources of the color have become of particular interest to researchers. Two manuscripts with superficially identical bright blues, for example, might contain very different pigments, and those differences can have meaning beyond their chemical composition.

Glenn will work in Morgan’s laboratory using a variety of spectroscopic instruments. In essence, he will shine different kinds of light on samples, and the spectrum of the reflected light can be used to deduce the chemical composition of the sample. He plans to analyze the makeup of the blue pigments in three manuscripts that all date from the late 15th century, one from Germany, one from France, and one from Italy.

“Most likely it will be azurite, which is a copper carbonate and is a much more common and a cheaper pigment,” he says. “But another possibility is ultramarine, or lapus lazuli, which was a much more lavish pigment that they used to illuminate these 15th century manuscripts.”

Understanding the financial considerations that went into the commissioning of illuminated manuscripts in the 1400s in three different regions will add to their provenance, and there are many more possibilities for historical insight in a field that is just getting underway.

“No one has really done this before,” says Gwara. “There’s a team at the Fitzwilliam Museum at Cambridge University, and their effort is really pretty big and prominent, but this is a new area.”

What’s made it possible is the recent development of new, nondestructive scientific techniques for analyzing art works, and Morgan is a world leader in that respect.

“Steve Morgan is really as close as you’re going to get to an authority on this anywhere,” says Gwara.

Glenn, who foresees a career path in the energy creation industry, took a course in medieval manuscripts his first semester to fulfill a humanities requirement for the South Carolina Honors College. He found the textbook discussion of the chemical composition of pigments particularly interesting, and when Gwara suggested applying for a Magellan Scholar grant to fund a project on the subject, he was on board.

“I really wanted to get involved in undergraduate research as early as possible in my college career,” he says. “Coming into this research, I knew that it doesn’t necessarily apply directly to what I’d like to do in my career, but it was a great opportunity, and I didn’t want to say no to it. You never know where it might lead.”

Gwara strives to help students find an outlet for their intellectual curiosity early on.

“By the time they’re seniors and have a couple of good research projects under their belts, then they’re ready to compete on a national or international level because they have the experience, the know-how.”

To learn how you can help support undergraduate research, visit Carolina’s Promise.