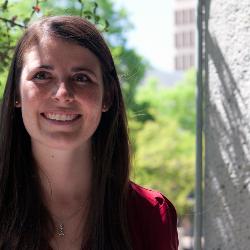 Anna Hawkins is one of three graduating seniors to win the Algernon Sydney Sullivan Award.

Anna Hawkins thinks she will be terrified the first time she straps into the cockpit of a Navy plane, but she has a well documented history of not letting fear slow her down.

A member of the University of South Carolina's Naval Reserve Officer Training Corps, Hawkins has climbed Mount Fuji, parachuted out of an airplane and spent two months backpacking through Europe with her best friend.

She is learning to scuba dive and plans to reward herself with a diving trip after graduating in May with a mathematics degree — that is, if she doesn't have to report right away to Navy flight school.

"I like to do adventurous things," says Hawkins, one of three graduating seniors to receive the university's highest undergraduate honor, the Algernon Sydney Sullivan Award.

Hawkins came to Carolina in part because her mother, Janice (Evans) Hawkins, '89 Nursing, had such a great experience as a student and a member of the Army ROTC. She gets her military appreciation from both sides as her father is in the Navy.

"I like the structure and the discipline of the military," Anna Hawkins says. "And I really wanted to do something to serve this country."

She came to Carolina with a thought toward majoring in Spanish, but she needed a technical major for the ROTC, so she chose mathematics with Spanish as a minor.

"I like being able to solve things," she says.

In fact, she is so good at math, she has been a math peer tutor and a peer leader for the Student Success Center since her sophomore year. She has made the dean's or president's list every semester and finishes her academic career with a 3.9 GPA.

"When I first met her, I was just wowed," says Ann Cameron, director of external relations for the College of Arts and Sciences. "I just wondered, 'How can someone this age have done the things she has done?'"

As a volunteer, Hawkins has given her time to Harvest Hope Food Bank, Relay for Life, the Fallen Heroes Memorial 5K, the NROTC Alumni Association Golf Tournament, NROTC Freshman Orientation and the NROTC Sailing Regatta. She credits her first mission trip to El Salvador the summer before she started Carolina with fostering her love of service, travel and adventure.

In the fall, she served as battalion commander for NROTC, the highest ranked midshipman.

"This position taught me the most about how to be a leader within the military and within the community," she says. "It taught me how to be a better follower and taught me many skills necessary to be a great military leader such as discipline, fairness and maintaining battalion morale.

"I will graduate from USC able to go out into the world as a successful leader and a proud representative of the Gamecock community."