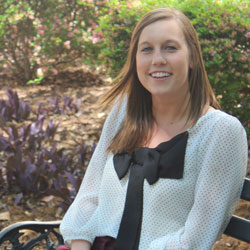 Cassandra Staton is one the three winners of the university's top award for undergraduates.

Sometimes what happens outside the college classroom has as big an impact on a student as what that student learns from her textbooks and professors. Take graduating senior Cassandra Staton, one of the university’s three Algernon Sydney Sullivan Award winners for 2014.

A business major in the University of South Carolina’s Honors College, Staton has maintained a 4.0 GPA and received a number of academic honors over the past four years, including the Outstanding Global Supply Chain Operations Management Student Scholarship Award. However, it was Staton’s involvement in philanthropic and mentoring programs that started her on a career path — in educational psychology.

As a freshman, Staton’s sorority pledge class participated in Dance Marathon, a student-run philanthropy that raises money for Palmetto Children’s Health Hospital. And while she admits now to going into the event with “a bad attitude,” her participation turned out to be one of the most transformative experiences of her college career.

“Working with Dance Marathon showed me where my values lie and also helped me realize my love for children,” she says. “I got involved the next year as a coordinator, and the next two years after that I was a director on the board.”

The desire to lead and inspire also prompted Staton to become a U101 peer leader and, later, to take on the presidency of her sorority, which she calls “one yearlong learning experience.”

“Before that position, I didn’t really have many major leadership experiences,” she says. “I learned how to work with my peers, gain the respect of my peers and motivate others.”

In the process, she gained the respect of her soon-to-be alma mater and made her family proud by winning the coveted Sullivan award — the same award her mother Sharon won while a student at Wofford in 1982.

“Of course, she loves that little bond,” Staton says. “Another great part was seeing my dad’s face — he could not stop smiling. He’s a pretty quiet dude so it was really great to see him so excited.”

Staton currently works in the provost’s office and will continue to work there through the summer, but she will begin the master’s in educational psychology program at the University of Virginia in the fall.

“I plan on doing research after I graduate, maybe doing a Ph.D.,” she says, “but ultimately I want to be in a school system doing hands-on work with kids and making sure they get the best possible education.”