Business researcher investigates what motivates us 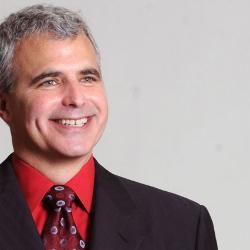 A 2014 Breakthrough Star, Anthony Nyberg researches motivation in the workplace.

“To me, everything I do is such pure common sense,” he says. “For example, if you pay people more, they turn over less. But people don’t like to admit that pay matters.”

Workers frequently will leave a job for as little as a 10 percent pay increase somewhere else.

“But companies too often discount that, thinking that someone would not leave for that amount of money,” he says. “And more importantly, companies forget how expensive it is to replace people, particularly their more productive people.”

An associate professor of management in the Darla Moore School of Business, Nyberg earned his doctorate after working a decade in financial services, including starting and growing his own firm.

Nyberg says his “aha moment” came when he realized that he and other business owners in vastly different industries were struggling with the same issues. “Whenever I met with peers and mentors in other businesses, every successful accomplishment – and most of the major headaches – discussed were people-based,” he says.

He also was at a point when he was looking for something more meaningful to do with his life. He consulted friends and associates, who suggested he consider either a career in politics or as a college professor. His one foray into the world of politics, running for a seat on the Marin County Hospital Board, wasn’t a total flop – “I think I beat the woman whose sole platform was that we should legalize marijuana” – but he didn’t garner enough votes to win a seat on the board. So he left for the world of academia, earning his doctorate at the University of Wisconsin-Madison.

He came to Carolina in 2008 and was made an associate professor with tenure in 2012. He was named a 2014 Breakthrough Star for his body of research, which examines how organizational practices and policies affect workers and the organization.

“Most of his research carves new ground by integrating rather diverse literatures and synthesizing them into a more holistic explanation,” Bank of America Professor of Business Administration Robert Ployhart wrote in the letter nominating Nyberg as a Breakthrough Star.

“My goal is to help remind businesses that it is the human element that is most responsible for achieving sustainable success. It is imperative that we rigorously pursue identifying the policies and practices that help unite people to strive to achieve a common purpose.”