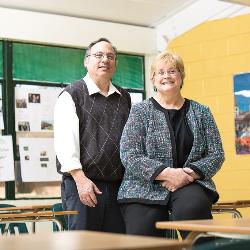 These S.C. educators trace their success back to Carolina.

From two up-and-coming teachers in Columbia to a premier German program in Aiken and award-winning headmasters in Charleston, here are a few S.C. educators who can trace their success back to Carolina.

Investing in the profession

Bailey Pettit Melvin and Alison Wellings Espinosa attended Carolina at the same time and both were national fellowship winners who grew up just a few miles apart in the S.C. Upstate.

But it wasn’t until they began teaching at Columbia’s A.C. Flora High School that they became friends and colleagues.

Now, the two are working to improve education in South Carolina, each in her own way. Espinosa, a 2006 Honors College graduate and 2007 M.A.T. graduate, received a fellowship from the Knowles Science Teaching Foundation and teaches advanced placement calculus. She hopes one day to influence the way math is taught in South Carolina.

“I have the idea of going back to school, getting a Ph.D. in math education and getting involved in curriculum development,” Espinosa said.

For Melvin, ’06 history, ’08 M.A.T., giving back means helping students who want to be teachers or to follow in her footsteps as a James Madison Fellow.

“I really loved history and I wanted to share it with other people,” Melvin says. “The university made me realize there’s  lots of other things you can do with a history degree. Butknew I wanted to be a teacher.”

“The whole goal of the program is to interest students in education,” Melvin says. “But if you don’t become a teacher,  at least you become aware of educational issues.”

Getting assigned to the wrong course in high school ultimately changed the course of Lara Ducate’s life. OK, that might be hyperbole, but then again…

“I had signed up for Spanish in high school but got put in a German class — I was kind of annoyed at first,” said Ducate, ’95, of her early 1990s experience at Aiken High School. Her annoyance didn’t last long because the German teacher, Art  Lader, turned out to be one of the most dynamic instructors Ducate ever had.

Art Lader, ’78, and his wife, Lisa, ’81, ’85 MA, have been having that effect on German students at Aiken High for a long time. The Laders met while studying at Carolina in the late 1970s. She, a German major, got a student Fulbright Scholarship to Germany and he, an English major, followed her there after taking an intensive eight-week course in German.

Within a few years, they both were German teachers at Aiken High, Lisa’s alma mater. And they’ve been there ever  since, teaching as many as 250 students every year, escorting them on field trips to Germany and sending many of them,  like Lara Ducate, to the university.

“How many of our students have gone to USC? A lot, an uncountable number,” Art Lader said.

“I had an incredible experience at USC. I can’t say enough about the Honors College,” Lisa Lader added.

Which perhaps explains how Lara Ducate ended up at UofSC. After toying with the idea of majoring in biology, she settled on German and graduated from the Honors College. She earned a doctorate in German from the University of Texas, then returned to UofSC 11 years ago as a faculty member. She’s now teaching the next generation of South Carolina’s high school German teachers. Ducate also taught Sarah Nell Lader, the daughter of her former high school teachers who graduated from the Honors College in 2012 and earned a Fulbright to study in Germany.

“The Laders are the reason I studied German, became a German major and ultimately became a professor of German,” Ducate said.

Swim coach? Check. UofSC degree? Check. Passion for K-12 education? Check. Now add one thing more to the things-in-common list of Erik Kreutner and his brother Jason: headmaster-of-the-year awards from the S.C. Independent School Association. Late in 2013, Erik was named Rookie of the Year for his first year at the helm of the 50-year-old Mason Preparatory School in Charleston. Jason, headmaster of University School of the Lowcountry, which he founded in 2007, received the Aimar Educational Leadership Award, given to the most outstanding headmaster of a SCISA member school.

What’s most fulfilling about leading your school?

Erik: We’re in the middle of major additions and renovations to campus, which will give our teachers much more flexibility in providing our students with an education that’s rich in 21st-century skills. With just over 300 students, I like that it is small enough that I can really get to know our students and our families well and to see what an impact Mason Prep has on their lives.

Jason: We wanted to create a different kind of school and curriculum. Our students take three languages at the same time — Mandarin, Spanish and Latin — and we take 30 or more field trips per year, which is the basis for the curriculum. We call them “learning outside the classroom days,” and they involve things like exit polling Mount Pleasant elections, visiting a Peruvian restaurant or attending a Mormon church, a synagogue and a mosque.

How did your degree from UofSC shape your career?

Erik: As I considered shifting my career focus to administration, I realized the importance of obtaining at least a master’s degree. The online aspect of the master’s in educational administration was very appealing, especially with two young children at home. The degree has proven very valuable to me; I especially appreciate the coursework that prepared me for instructional leadership — working with teachers to make them better at what they do.

Jason: I did the baccalaureaus degree at the Honors College, and I credit the college, and my degree specifically, for making the decision to launch a school on my own with a nontraditional curriculum. If I hadn’t been stretched and pushed in the Honors College, if I had been conservative in my approach, I wouldn’t have been apt to take a risk like this and try something that’s turned out to be cool and different.

These K-12 educators are among several alumni featured in the spring 2014 edition of Carolinian, the university's award winning magazine. Join the My Carolina Alumni Association to become a subscriber. Visit Carolina's Promise to see how you can help today's students become tomorrow's teachers.