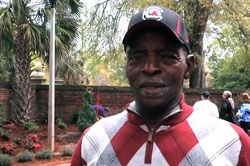 Pearl Fryar discusses his topiary creation for the 1963 Desegregation Commemorative Garden at Carolina.

Fifty years ago, Henri Monteith Treadwell, Robert Anderson and James Solomon climbed the steps of the Osborne Administration Building to register as the first African-American students at the University of South Carolina since Reconstruction. As part of a yearlong remembrance, Carolina is dedicating a new garden in a quiet nook adjacent Osborne’s north wall.

The garden, to be dedicated Friday (April 11), will feature a granite monument engraved with an original poem by poet and professor Nikki Finney, plus three living sculptures by topiary artist Pearl Fryar, who is cultivating three young junipers to represent the three students.

“I was on the picket lines during the civil rights movement,” says Fryar, who attended North Carolina College (now N.C. Central) in the late 1950s and early 1960s. “If you had told me 50 years ago that one day I would be asked to do this sculpture, I would have thought I’d lost my mind. This is huge and shows how far we’ve come.”

The son of a North Carolina sharecropper, Fryar knows what it means to seek a better life. “We were just laborers,” he says of his days behind a mule and plow. “It was like a plantation. My father grew up there, and I was being groomed to do the same.”

After college, Fryar went to Korea with the military then worked in private industry, living in New York and California before finally settling in Bishopville, S.C. There, the desire to win the city’s Yard of the Month award finally led him back to the soil—though he knew nothing about horticulture or ornamental plants. “Gardening was a way to earn a living, feed your family and pay the bills,” he says. “Not something to look at.”

Still, Fryar imagined a landscape of wonderfully shaped plants reminiscent of a public garden he had seen in Korea. A local nursery gave him “throwaway” trees and shrubs, plus a three-minute lesson on shaping topiaries, and he began converting a former cornfield into the garden of his dreams. The fact that no African-American had ever won Bishopville’s Yard of the Month contest was no obstacle. “I wasn’t going to let that determine my future,” he says.

After five years of both praise and odd glances, a sign proclaiming Fryar’s yard the best in Bishopville was placed on his front lawn. “They left the sign there for three months,” he says with chuckle. “I had to remind them to come and get it.”

That was in 1985. Since then, the Pearl Fryar Topiary Garden has been featured in national magazines and newspapers, showcased on national television and recognized by the Garden Conservancy for its exceptional display. Each year, Fryar shares his garden with more than 10,000 visitors from around the world.

Now, Fryar is bringing his vision to Carolina. The three new topiary sculptures— two spiral-shaped junipers and a third featuring three pompoms connected by an arc representing unity—are still young but will fill out over the next few years.

“I like to let people see what they want in my plants,” Fryar says. “I want to create a place where people can reflect and feel, a place that will somehow make you feel differently than when you came.”

This weekend (April 11-12) marks the culmination of a yearlong commemoration of the 50th anniversary of desegregation at UofSC. Fryar's topiary garden will be dedicated at 11 a.m. Friday outside the Osborne Administration Building. "Our Journey Forward," a multimedia performance with original choreography and music, is at 7:30 p.m. Saturday. Admission is free.