From fragile X to autism: looking at early signs 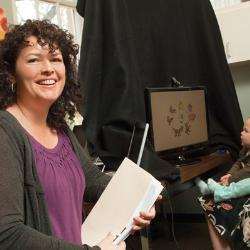 A child's diagnosis of autism typically comes between three and four years of age. Jane Roberts' research might help identify behavioral signs in infants that could lead to earlier recognition and treatment of the disorder.

Jane Roberts has worked with kids who have disabilities for her entire career. But after seven years as a school psychologist in a school system in south Florida, she felt she just wasn't making a difference. So she returned to school for her doctorate at the University of North Carolina, Chapel Hill, where she also became interested in the developmental disorder known as fragile X syndrome.

Now a professor in USC's department of psychology, Roberts has become one of the world's foremost experts on the syndrome and is now finding new ways to help the developmentally challenged children she cares so much about.

Fragile X is a single-gene disorder, meaning that errors in just one gene bring on the condition, signs of which can include distinctive facial features, varying levels of cognitive difficulties, unusual behaviors (such as repetitive motions) and social anxiety. Because its cause can be traced to a single gene, those with the syndrome can be identified – and thus diagnosed, even prenatally now – by a simple genetic test of a blood sample.

"People want to hurry and intervene with babies with fragile X. But I would argue, we're not ready for that because we don't know what babies with fragile X are like," she says. "Three- to 5-year-olds with FXS are typically hyperactive, running around, inattentive. Babies can be the opposite. Many are kind of hypoactive, sluggish."

Roberts' work is helping establish how the behavior changes over time, and thus how possible interventions might have to be tailored appropriately. She is also using her work on fragile X to investigate autism, with which it is highly associated: a child with a fragile X mutation is about 60 times more likely to be diagnosed with autism spectrum disorder.

"I do autism work, but it's primarily through the lens of fragile X," she says. "If we can learn about the genetic contributions that affect behaviors in fragile X, it gives us an opportunity to look at those same pathways in autism or other disorders that have the same problems, where we don't know the genetic mechanism."

"Most autism diagnoses are between three and four years of age, because it's a behavioral diagnosis," Roberts says. "You need to be able to observe atypical social communication and restricted and repetitive behaviors to diagnose autism, and many of these behaviors are either immature or not present in infancy."

Roberts is leading a team currently following infants at high risk for later developing autism (which include babies with fragile X as well as others who have older siblings already diagnosed with the disorder) over the first several years of their lives. She hopes that the work might lead to ways of identifying autism at even younger ages and potentially point to effective treatment options.

That would be a big step forward for a disorder with such uncertain genetic underpinnings.

"Most complex human behaviors are the result of genetic factors that interact with the environment in a developmental context," she says. "For many disorders or conditions like breast cancer or alcoholism, they've discovered genetic components, but we cannot understand the full expression of the condition without paying attention to the environment. Same thing, I believe, with autism. There are clear genetic vulnerabilities, but its full expression is reliant on environmental factors like stress, communication opportunities, and training.

"Questions like 'why does one child develop autism and another not?' is part of what drives my research, and I couldn't be happier than in a career that allows me to ask and start to answer such questions."