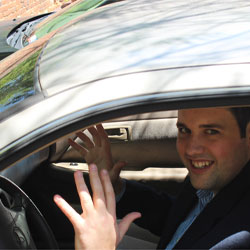 Who's to blame when there are no hands on the wheel?

It might seem like a flight of fantasy — a car that could actually drive you to work (or your child to soccer practice) all by itself — but the technology is being tested and its advent on roadways is all but inevitable.

The question now is determining who will be blamed when a self-driving car causes an accident.

Jeff Gurney, a third-year student in USC’s School of Law suggests several scenarios in which the developer of the self-driving technology — not the driver — should be held responsible. He makes his case in an article, “Sue My Car Not Me: Products Liability and Accidents Involving Autonomous Vehicles,” published in the University of Illinois Journal of Law, Technology & Policy.

“Autonomous vehicles could be enormously helpful to transport the elderly, the disabled, the incapacitated, those too young to drive and those who are simply too busy and would rather work during a commute,” Gurney says.

“It’s predicted that autonomous vehicles will reduce the number of fatalities and injuries resulting from human error and that fuel efficiency will improve dramatically. But no technology is perfect. There will be accidents.”

Self-driving cars equipped with Google-developed technology have logged more than 300,000 miles of autonomous test-driving under a variety of conditions without a serious mishap. But Gurney takes a lawyerly approach in sizing up what should happen when the inevitable wrecks involving such vehicles occur. He thinks forcing riders to be fully liable if their self-driving cars malfunction — a stance that technology developers might support — would defeat the purpose of the technology.

“Why pay for an autonomous car if you’re going to be expected to be vigilant behind the wheel and take over at the first sign of trouble?” he says. “That defeats one of the selling points, which is that you can be more productive while letting the car do the driving.”

Gurney got interested in the topic after taking a course on tort liability in his first year of law school. Professor David Owen helped him with the paper that would eventually be published in the University of Illinois’ law journal.

“It’s not every day you get to help shape the landscape of an emerging topic,” he says. “I’ve had four citations on the paper so far.”

One of the sources Gurney cited in his article is Bryant Walker Smith, an expert on autonomous vehicles, a fellow at the Center for Internet and Society at Stanford Law School and a fellow at Stanford’s Center for Automotive Research. Smith will join the faculty at Carolina’s law school this fall as an assistant professor.

The future looks bright for Gurney, too. He accepted a two-year clerkship with Timothy Cain, a federal judge in Anderson, S.C., and thinks the published article might have helped him get the job.

“It was a main topic of the clerkship interview,” he says.

See how you can help the School of Law complete its new building through Carolina's Promise.