Artist's lens on an undersea world 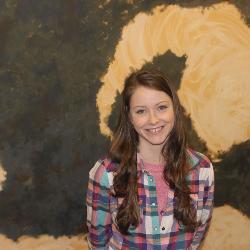 An artist slips beneath the waves for inspiration.

Few of us will ever scuba dive in the Dutch Caribbean, but there’s almost no need to if you can spend a few moments gazing at Katie Boatman’s paintings.

Tranquil colors, rippled shapes and the dreamy aesthetics of an undersea paradise come alive on the massive, eight-foot-wide canvases she’s created as part of her final MFA studies.

“I’ve always had an affinity for nature as a place to find solace,” said Boatman, whose earlier art was informed by the woodlands of Tennessee, her native state, during baccalaureate studies at Belmont University.

She was drawn to Carolina for graduate school partly because of its proximity to both mountains and the shore, though it’s been the latter that’s captured her imagination. With fellow art students and professors David Voros and Pam Bowers she’s traveled every semester to the university’s marine research facilities at Baruch Institute near Georgetown.

“That experience changed my life,” she said. It also helped prompt her to apply for a SPARC (Support to Promote Advancement of Research and Creativity) Graduate Research Fellowship Program grant, funded through the Office of Research. The grant supported a week-long study in Bonaire, a Caribbean island and tropical mecca for snorkeling and scuba diving.

The idea was to scuba dive along the pristine shores and paint a series of canvases based on on her impressions of the underwater world. “My work is centered around painting something that cannot be seen but is a primal, internal response to these experiences,” she said. She took scores of photographs and kept a journal to record her memories of the vivid underwater landscape.

“The images are essentially a record,” she said. “It helps to have them to recall certain color relationships and the play of neutral and chromatic colors because memory fails you at a certain point.”

The canvases she’s painting comprise “Grounding Depths,” on display April 21-May 2 in McMaster Gallery, and are an “attempt to express an experience to the viewer of an alternative reality,” she said.

One of the paintings features shapes similar to the tubeworms and sponges she encountered on some of her dives. Colors underwater are muted, she said, especially the deeper you dive, but the tubeworms seemed to pop with color as if they were under a black light.

Another canvas conveys the state of neutral buoyancy, “which you experience when you dive correctly,” Boatman said. “It feels like you’re back in the womb.”

Yet another depicts the structure and ecosystem of a coral reef, the intricate castles of calcium carbonate that play host to myriad marine species.

With the excitement of graduation looming in May, Boatman reflects on the past three years she has spent refining her identity as an artist.

“As an MFA student, my art has grown exponentially. I’m not the same person or artist that I was when I arrived,” she said. “When I came here I needed to figure out not just my art but where I am in life. The best thing I’ve done for myself is being open to change and growth.”

The Office of Research provides many opportunities for student research and scholarly achievement through its SPARC grants and Magellan Scholar Program, offered by its Office of Undergraduate Research. Visit the Carolina's Promise website to see how you can help support students like Katie Boatman.