As a Gamecock, my strength has No Limits. 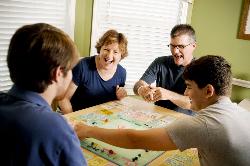 The severe headache, the numbness in his side and the loss of balance were the start of Mark Cox's toughest battle.

The severe headache, the numbness in his side and the loss of balance were the start of Mark Cox’s toughest battle. The sudden stroke damaged the left hemisphere of Mark’s brain, leaving his intelligence intact but limiting his ability to process language and formulate speech, a condition known as aphasia.

But the former military officer and University of South Carolina graduate knew how to face the challenge: he returned to his alma mater. Armed with the resources of the School of Public Health, Mark is benefiting from a clinical trial led by Julius Fridriksson, a leading expert in stroke rehab.

As the director of the USC Aphasia Laboratory, Julius is a true pioneer in this area of stroke recovery. “There is enormous potential for recovery, but it is rarely fully realized,” he said.

It turns out that the brain is much more capable of developing new neuronal connections than previously thought. “The old adage, ‘you can’t teach an old dog new tricks’ is simply not true — at all,” Fridriksson said.

Much remains unknown about how the brain responds to injury such as stroke and the factors that determine prognosis. “We need a better understanding so that clinicians are better armed,” Fridriksson added. “Even with treatment options that are currently available, studies like this one are unequivocal: the more rehabilitation individuals receive, the better off they are.”

Mark’s fight has been slow but sure. He’s determined to face the challenge set before him. “Never give up,” Mark says often. “Worse life … or happy life, it’s life. Live to the fullest! No sad song! You can do this — press on!”

So with the help of his family and friends as well as Fridriksson and others at USC, Mark is maximizing his speech recovery and overcoming his biggest enemy.

The USC Speech and Hearing Center is for people who have difficulty communicating as a result of stroke, a condition known as aphasia. To learn more and to join a stroke recovery group, click here.