As Gamecocks, our concern has No Limits. 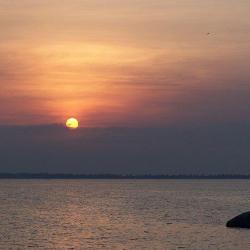 These islands are located on the northern shores of Uganda's Lake Victoria, Africa's largest freshwater lake, but there is very little to drink.

Lush shorelines covered with tropical palms beneath an azure sky are the pictures of paradise. But Uganda’s Buvuma Islands are no heaven on earth. The drinking water is filthy, HIV prevalence is near 90 percent, there are few schools, fewer roads and no electrical and sewage systems. Too many children die from cholera, dysentery and other water-borne diseases before they are old enough to read.

“From a distance, the Buvuma Islands are scenic, sunny, tropical and pretty,” says Terry Wolfer, a University of South Carolina professor who has journeyed there six times. “But the reality really hits you when you step on land.”

“It’s abject poverty on a scale that’s far beyond what we have in the United States,” says Kloot, a researcher in Carolina's Earth Sciences and Resources Institute. “It’s very difficult to describe a place where people are too poor to have tin roofs or cement walls or glass windows or even simple toilets in their homes.”

“The health issues from using or drinking unsafe water was a big threat to the lives of the people on the island,” says Robert Wafula, vice president of Shepherd’s Heart International Ministry, a multinational charitable organization.

In 2006, Kloot journeyed to the islands for the first time to help deploy clean drinking water systems. Once there, his mission changed from professional to personal. And Kloot asked Wolfer, a professor in the College of Social Work with experience in community engagement, to help. Although unfamiliar with Africa and water problems, Wolfer accompanied Kloot to Uganda the next summer.

With the help of the Ugandan staff members of Shepherd’s Heart, they deployed and repaired water purification systems and conducted conferences to help village leaders better understand the risks of water contamination and the cost of obtaining safe drinking water. But simply introducing Western technology didn’t improve conditions. Technical breakdowns, logistical hurdles and community strife plagued their efforts. “After a couple years, we realized that our ‘fantastic American solutions’ were causing more problems,” Kloot says. “The villagers became even more dependent on foreign aid.”

In preparation for their 2009 trip, Wolfer and Kloot wished for another solution, a better way to help. Then Wolfer heard a report on National Public Radio focusing on global sanitation. He and Kloot latched on to the work of Kamal Kar, the pioneer of Community-Led Total Sanitation, a process used in poor, rural areas of the developing world.

“That’s when we understood the villages didn’t have a water problem,” Kloot explains. “The islands are located in the one of the world’s largest freshwater lakes. They had an open defecation problem. Many villages have from 200 to 1,000 people and no or only a handful of latrines.” Rainwater runoff washes the contaminants into Lake Victoria, which is the source of the islanders' drinking water.

As they prepared to return, Kloot and Wolfer immersed themselves in learning about Community-Led Total Sanitation, finding valuable resources in books and online. Once back in Uganda, they demonstrated the system and coached Ugandans to lead it.

Community-Led Total Sanitation provokes communities to recognize and acknowledge the problem of open defecation and to take actions to eliminate it. This is accomplished by dramatically focusing on the conditions that inhabitants avoid discussing. The intervention includes locating open defecation throughout the village, informally mapping these areas, calculating the volume of feces, demonstrating how flies contaminate food and proving that clear water isn’t necessarily safe drinking water. Facilitators lead by asking questions throughout the intervention. Eventually, the villagers realize they are unintentionally contaminating their own food and water.

Agitated and concerned, the villagers immediately want to know when the team will start building latrines and water systems. The facilitators reiterate their purpose is to ask questions, not build latrines or give funding.

“Once the community realizes that the facilitators aren’t going to solve the problem for them, most communities collaborate to find workable solutions,” Kloot says. “They clean up contaminated areas, repair old outhouses and build new ones. The disgust and embarrassment propels them to action.”

Kloot and Wolfer have trained staff members of Shepherd’s Heart International Ministries, who continue the exercises after the two professors return to the United States. So far, the team has conducted Community-Led Total Sanitation intervention in more than 20 villages, with mostly positive results.

“The program of water and sanitation has resulted in unity among local leaders and community members as they have come together to help their villages escape the danger diseases caused by open defecation,” says Wafula from Shepherd’s Heart. "Their involvement has had a big impact and there is lots of evidence to show it. We commend them for their heartfelt support and service to Shepherd’s Heart International Ministry and the entire islands of Buvuma.”