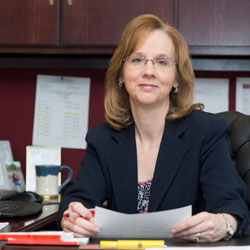 The internal auditing department at the University of South Carolina has a new name, a new approach to how it does business and a new executive director to make it happen.

Pam Doran, a former auditor at Cornell University and Eastman Kodak, joined the university earlier this year to head the Office of Audit and Advisory Services. Along with 28 years of professional experience, Doran brings a sense of curiosity to explore all of the outdoor features —mountains, beach and rivers — the Palmetto State has to offer.

@UofSC Today caught up with Doran in a spare moment from her risk analysis to learn more.

What’s the significance of the auditing department’s new title?

Historically, audit functions have been focused only on financials. But in recent years, audit offices have begun looking at internal controls more broadly to include risk management, governance and to provide advice on how different functions within the university can better collaborate. We’ve started partnering with the Office of Risk Management, University Technology Services and other areas where we have overlapping responsibilities. We’re also bringing expertise to some newly regulated areas such as the Health Insurance Portability and Accountability Act.

Have you always worked in auditing?

For the past 12 years, I was in auditing at Cornell University. Before that I worked at Eastman Kodak for 16 years, and about four of them were in the audit office. I also worked in information technology and financial services and other areas of the company.

So up until now, you’ve always been in New York?

I’m originally from Rochester and have always worked in New York, yes. I had always planned to move south at some point, but what really brought me here was the opportunity to start a new approach to the audit functions at USC.

Now that you’re here, what are you looking forward to outside of work?

One of the things that attracted my husband and me to Columbia is the opportunity for boating at Lake Murray and kayaking in some of the rivers. We also like how close it is to the ocean and the mountains. My 10-year-old son is playing baseball — a lot earlier in the spring than he could have up north — and is really enjoying his new home.