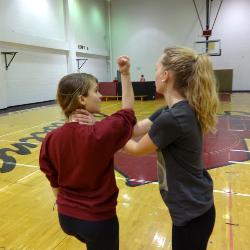 Women's self-defense classes on campus are teaching Gamecocks how to be prepared for an attack.

When Skye Klink studies abroad in Prague this fall, she wants to be prepared. Having studied abroad in Spain last summer, she knows the ups and downs of settling into another culture.

This semester Klink, a junior public relations major, decided to prepare for her upcoming trip by enrolling in a for-credit self-defense class taught by professors Ed Carney and Shannon Henry from Surviving Assault and Standing Strong (SASS), a local self-defense organization for women.

“I want to be able to feel comfortable walking around the city and exploring all it has to offer,” Klink says.

SASS techniques are taught using maneuvers that take into account the smaller size and mechanics of the female body. The classes teach students a mixture of practical and theoretical self-defense lessons.

The benefits of the classes are unmistakable, Klink says. At the end of the course, students will be able to perform counter-attack sequences, hand strikes, elbow strikes, knee strikes and kicking techniques, and will learn about the necessary procedures to take after an assault has occurred.

“I now breathe a little easier every time I get gas or when I’m out late with my friends,” she says. “Joining SASS classes has been an exciting and positive journey, giving me a defensive toolbox filled with different ways to stay safe.”

The class doesn’t just help Klink breathe easier. Her mom, Debra Clark, is also resting a little easier now that her daughter has learned to defend herself.

“It is essential and empowering for a young woman to take this class, and as a mother, I am so grateful that it’s being offered at USC,” Clark says.

Carney started SASS in 1997 after counseling a rape victim. With a long history in martial arts, Carney began to teach the victim defensive maneuvers that helped her recovery.

Since then, Carney and Henry have trained thousands of women in Richland and Lexington counties, South Carolina female police officers, SLED and SWAT teams and state troopers.

Alongside plenty of essential practice outside classes, SASS students are taught maneuvers that are capable of impairing an assailant during an attack.

“I got involved with self-defense when I was invited to attend a four-hour class,” Henry says. “There was no mistaking its power, effectiveness and value to women and girls of any race, space and time.”

Henry, a South Carolina native, has taught a wide variety of women self-defense, from women in their 70s to her 12-year-old daughter.

“SASS is empowering, comforting and preventative, whether you are a survivor of an attack or someone seeking to protect yourself from an attack. No one has ever reported a failure — those are amazing statistics,” she says.

This semester, Henry was formally recognized as an inspirational woman on campus at the Women’s History Month Awards Breakfast. She was chosen to receive an award for making significant, positive changes in the university community and in the lives of those she has touched.

“We are doing all we can here at home, in a grass-roots effort to make the University of South Carolina and the surrounding community a place where women can feel safe and prepared,” Henry says.

The SASS classes, which are offered every semester, are only one part of the university’s efforts to prepare students for attacks. Sexual Assault and Violence Intervention and Prevention offers support and services to students, faculty and staff who are survivors of sexual assault, attempted sexual assault, relationship difficulties, dating issues, domestic issues and any forms of interpersonal violence.

As part of Sexual Assault Awareness Month, that organization is promoting The Clothesline Project, a national project that started in 1990 to address the issue of sexual violence. It encourages men and women affected by assault to express their emotions by decorating a T-shirt.

The SASS instructors at Carolina advocate taking advantage of these services and finding out as much information as possible, Henry says.

“It takes a whole community to address sexual violence,” says Henry. “The more information you have, the better equipped you are.”

Get involved with Surviving Assault and Standing Strong and learn more about sexual assault and violence prevention and services at Student Health Services.