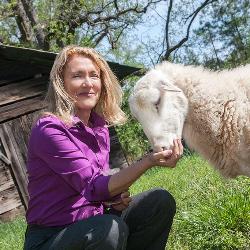 Neuroscientist Rose Booze grew up on a sheep farm, working beside her father, who years later would be diagnosed with Parkinson's disease. Memories of her childhood encourage her research today into the root causes of this devastating illness.

Rose Booze spent her childhood on an Oregon sheep farm, rising at dawn to work beside her father before heading to school. His overalls, his favorite John Deere cap and his hands are favorite memories of that time. "You never forget life on the farm," she says. "It's a different lifestyle that not many people have these days."

Her horse, 4-H and raising prize-winning sheep put Booze on the path to becoming a veterinarian. But those plans changed in college. An anatomy class offered a glimpse inside the mysteries of the human brain. "There is something awesome about the brain," she says. "It makes us who we are. How does this convoluted glob of gooey tissue hold our personalities and memories? And why does it go wrong, sometimes? I think these are key questions."

Then her journey into brain research became personal when her grandfather was diagnosed with Parkinson's disease. "At the time, drugs like L-DOPA only relieved the symptoms. There was no way to alter the course of the disease," Booze explains.

Around the time Booze was investigating the root causes of dementia, Parkinson's disease and Parkinsonian-type defects in HIV and drugs of abuse, she recognized small tremors in her father's hands — the same hands that helped her raise prize-winning sheep. "I was the one who noticed my father's subtle impairments," she recalls.

"Members of the family said he was just getting old, but I recognized the signs. I took him to the VA hospital, where he was diagnosed." Fortunately for him, advanced medical treatments and drugs were available, and he had a much easier time managing the illness than his father. He was also fortunate to have "a slower-progressing form of Parkinson's," she adds. "He lived with it for more than 15 years. My parents enjoyed many years together, often traveling and enjoying life. But they always knew what the ultimate outcome was going to be."

With support from the National Institutes of Health, Booze and her team of co-investigators, students, and doctoral fellows continue cutting-edge work. "You cannot predict outcomes," she says, "but I believe we're closer to a cure now than when my grandfather had the disease. I can definitely see progress and hope."

Visit Carolina's Promise to learn how you can support important research like Rose Booze's investigation of neurocognitive disorders.