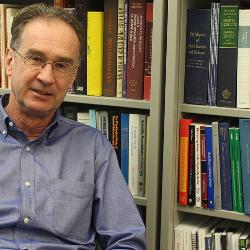 Russ Pate has spent a large part of his career looking for solutions to a public health crisis that many people simply don't see — although one aspect of it has become difficult to overlook.

"There's a huge public health burden that comes with low levels of physical activity, and an obvious manifestation of that is the obesity epidemic that we're in the midst of," says Pate, a professor in the department of exercise science. "But that doesn't even begin to capture the total public health burden."

It's the result of the embarrassment of riches, in a sense, that first-world development confers on a society.

"We've engineered a society that no longer demands very much physical activity," he says. "This is probably the first time in human history when we've ever really had this problem. We evolved to be hunter-gatherers. That's really what our bodies were designed to support, a hunter-gatherer lifestyle, and we've learned the hard way that our bodies don't do very well when we're inactive, when we don't live in a way that supports that hunter-gatherer DNA."

The data are rock solid, according to Pate. It's not just obesity, but chronic health problems that can take years to show up, from heart disease to type 2 diabetes to cancer. "Low levels of physical activity are a huge cause of morbidity and mortality in the developed countries of the world," he says.

Since joining the University of South Carolina faculty in 1974, Pate has modified his career trajectory over the years to try to help nip the problem in the bud. Children have seen some of the most dramatic decreases in physical activity over the years, and they're the focus of his research.

As chair of the National Physical Activity Plan Alliance, he presented the nation's first "report card" on physical activity for kids to the Congressional Fitness Caucus in Washington, D.C., on April 29. The scores were not good: In 10 categories, there were two C's, two D's, an F and four incompletes. The high-water mark was a B-minus.

"The extent to which kids get to school by active transport, either by walking or riding a bike, was a particularly depressing metric," he says. "That was the one that was rated F. When you talk about societal change, that's one in my lifetime where the social norm at one time was, kids walked or rode their bikes to school.

"That is a huge loss of physical activity for kids. It's both ways, to school and back home, and it's something that was there in the majority of American kids' lives almost every day, and now it isn't."

He and his colleagues in the field are developing ways to put physical activity back into kids' lives, and a lot of their solutions are aimed at schools and afterschool programs.

"There are a lot of strategies that have been tested, and many of them have been studied and found to be efficacious – I think we have a lot of arrows in our quiver right now," Pate says. "There's actually quite a lot of activity now incorporating classroom exercise breaks into the school day. That seems to be getting some traction, and I personally think that's one of the bright spots in the field right now."

The big challenge, though, is to get successful programs in place on the scale they're needed. It's difficult to impress on the public and policy-makers the urgency of the situation, Pate says. Health problems will be severe and costly, but for schoolchildren they're mostly many years away and all too readily ignored for now.

"Frankly, it's easier to create a sense of emergency when it's an infectious disease," Pate says. "Take the Ebola epidemic in West Africa — it scares the devil out of people. The public health system revs up and you can deal with the problem."

He thinks a solution will be found, though, one way or another.

"I'm an optimist. I think we are going to figure this out," he says. "Because we have to — we're endangered. This is not good for our health."

Find out how you can help support research like Russ Pate's work in exercise science and public health at Carolina's Promise.