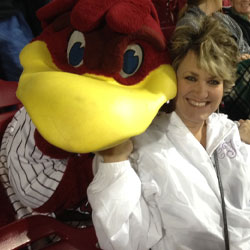 After suffering a life-threatening brain aneurysm, Sandy Tanner enjoyed a recent baseball game at Carolina Stadium with a little extra attention from Cocky.

On a sunny afternoon this past January, Sandy Tanner was a master's student with one semester to go, packing for a trip to the beach with her family.

Three minutes later, she was packed into an ambulance and rushed to the hospital.

Tanner had a headache that day, but ignored it; she'd suffered from migraines for years. A week earlier, a doctor had attributed her recent blurry vision to age.

"I was talking on the phone with my mom, and a few minutes later my 6-year-old son found me collapsed in the back of the car," says Tanner, who earned a bachelor's degree in 1991 and an M.Ed. in 1993.

She had worked as a therapist at a residential facility for adolescents, then spent several years at home with her three children. Earning a master's degree in educational counseling was part of her plan for re-entering the workforce as a school counselor.

"My husband came driving up — just three minutes after I collapsed as it turned out — and called an ambulance," she says. "I woke up a week later in the hospital, and my lungs and my heart were failing. An aneurysm in my brain had burst."

Tanner's aneurysm had a wide neck, making it difficult to treat. In fact, a year earlier little could have been done, her neuroradiologist, C. Blease Graham III,  told her later. But a new device called a pipeline stent had become available.

"I was in the ICU for a week and on a regular unit in the hospital for another week," Tanner says. "They were going to send me to a rehab facility, but I walked out of the hospital on my own."

Usually half of those who suffer a burst cranial aneurysm die from the event, and another 30 percent suffer a debilitating injury such as paralysis or cognitive impairment. Tanner is among the 20 percent who escape with no lasting effects though she points out that recovery can still be difficult.

"You don't have a brain bleed without any consequences. I didn't know who my husband was at first; there's so much information filed away in your brain that has to be sorted out," she says.

It's common to have more than one aneurysm, and her doctors successfully treated a second one a month after her discharge from the hospital. A third appeared but has spontaneously disappeared.

The month of May has been bittersweet. "It's hard now because my cohorts are graduating," she says. "I would be graduated now, too, and everyone is moving on. But I could also be dead or in a wheelchair."

"People often think aneurysms are limited to older individuals, but they happen in all age groups, even infants and children," she says. "I think about college kids who perhaps are experimenting with stimulants, even energy drinks, and don't realize this can contribute to brain aneurysms or rupture because of the artificial rise in blood pressure. Many victims lie on a couch with a severe headache, wasting time not understanding what it could be. The earlier you get treatment, the better — a scan is all that's needed."

In the meantime, she's looking forward to re-enrolling for the spring 2015 semester to complete her degree. It will be a year later than she had planned — but definitely not too late.