A summer to remember 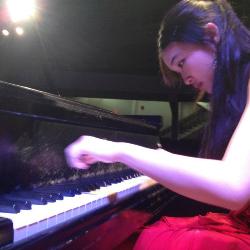 The Southeastern Piano Festival  is going on this week at various locations in Columbia.

The summer of 2004 was a memorable time for Susan Zhang. "I was in the 10th grade," she recalls. "And I was nervous and intimated about coming to the piano festival for the first time. I hadn't spent a lot of time around students who took playing piano seriously, and I didn't know what to expect."

However, the intense training, playing and camaraderie she received at the festival bolstered her confidence and sparked a passion that she has put on display this week in Columbia.

Zhang returned to campus to perform as part of the 12th Annual Southeastern Piano Festival. She joined her former professors at the Piano Extravaganza to perform an arrangement for five pianos of Saint Saens' "Danse macabre."

"That summer opened an entirely new world to me," Zhang says about her first visit to Carolina a decade ago. "Working with Marina Lomazov and Joseph Rackers changed my life. Up to that point, piano was just a hobby for me. I only started playing because my friends were taking lessons. Joseph and Marina made me realize how much work I needed to do. They challenged me and required me to dig deep within myself."

"Susan has developed continuously since she first attended the Southeastern Piano Festival at age 16," says Rackers. "She's made remarkable progress, developing both artistically and technically in a wide range of repertoire."

Soon afterwards, Zhang returned to Carolina, earning a bachelor's of music degree in piano performance and then went on to study at the Eastman School of Music, where she earned a master's degree. In addition, she has performed in numerous venues across the U.S. and internationally. In July 2011, she gave a solo recital at the Qingshan Theatre in Wuhan, China, and in 2012 traveled to Caracas, Venezuela, performing in the city's famous El Cerrito and the Escuela de Música Mozarteum.

Rackers notes that her performances of Rachmaninoff's "Corelli Variations," Ravel's "Ondine" and many other works have distinguished her as a pianist of "sincerity and depth."

Currently, Zhang is back in Columbia, enhancing her repertoire while pursuing a graduate certificate in piano performance. In the coming months, she'll perform around South Carolina, giving concerts in Florence, Aiken and Sumter among others. Her plans to earn a doctorate degree eventually, but her immediate plans are to enjoy performing at the festival and seeing friends and colleagues this week.

In addition to Zhang's performances, the festival will host numerous concerts and events throughout Columbia. A series of master classes taught by legendary American pianist, conductor and teacher Leon Fleisher and recitals by other prizewinning pianists are scheduled for the entire week.

"Coming back as a guest performing is the fulfillment of a dream," says Zhang. "It's unreal, a dream come true. And I'm deeply honored to play at the festival that launched my studies and my career."

Visit the 12th Annual Southeastern Piano Festival website for a complete schedule of next week's events.