I love ya, tomorrow! 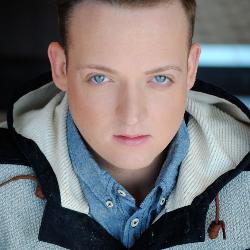 After several auditions that went down to the wire, Cameron Mitchell Bell struck gold, landing a part in the upcoming national Broadway tour of "Annie."

For Cameron Mitchell Bell, the sun will come out in September. That's when the musical theater performer hits the road with the 2014-15 national Broadway tour of "Annie."

Bell, a 2008 vocal performance graduate of Carolina's School of Music, has had "to hang on till tomorrow" a lot in the musical theater business, playing in regional productions and performing as the genie in "Aladdin" on a yearlong Disney cruise ship gig. He recently went through a spate of auditions for seven different Broadway touring shows, making it to the final tryout each time without getting selected.

"It's a constant struggle to find work in this business, but with musical theater you've got to stick with it and not give up," Bell says. "It's about work ethic and staying with it through ups and downs."

That never-give-up attitude no doubt helped him land the role of Bert Healy, an old-school radio singer, in "Annie." The iconic show will be directed by Martin Charnin, the original lyricist/director of the musical's debut in 1976. In addition to his featured role, Bell will also sing with the ensemble cast on other musical numbers when "Annie" begins its 35-city tour.

"To think that the man who wrote these songs is going to be directing me seems unreal," he says. "I'm from a very small town in S.C., and the idea of moving to New York seemed like such a distant possibility. But I had great training at USC, and I'm now where I want to be."

Bell, who is from North Augusta, S.C., credits his studies at Carolina with knowing how to protect his voice on extended tours — he performed in 376 productions of "Aladdin" on the Disney cruise tour — and how to conduct himself professionally. He has completed all but final requirements for a master's in musical theater and vocal performance from New York University, and, ultimately, would like to teach vocal performance. But first, he wants to emulate the career path of one of his School of Music professors at Carolina.

"Walter Cuttino, one of my voice professors at USC, had a huge opera career in Europe before he started teaching. I think if you're getting a vocal performance degree, you should have faculty who have performed professionally," he says.

Bell is careful not to look too far beyond the "Annie" tour but admits that performing on Broadway is a huge goal. "But Broadway is not the epitome of everything. I just want to keep moving my career forward," he says. "There's nothing worse than waking up every day and going to a job you hate. That's why I choose a career in musical theater. It's what I want to do, and it's a huge blessing to get paid to do it."

To learn how you can support talented young musicians @UofSC, visit Carolina's Promise.