Making a name for UofSC in children's literature 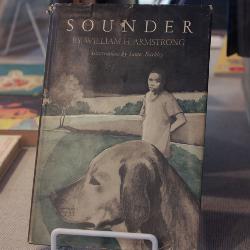 Carolina's Hollings Library is featuring an exhibit of children's and young adult literature, including collections from famed storyteller and librarian Augusta Baker, author of an influential bibliography of works for children that accurately depict African-American life.

Putting together an international conference that draws the world's foremost authorities on children's literature is a daunting task, but no more so than creating in just a few years an interdisciplinary program at the University of South Carolina that is recognized by those same authorities as "legit."

"There are very few programs that have the interdisciplinary courses we offer at a Tier 1 research institution," says Michelle Martin, the Augusta Baker Chair in Childhood Literacy in the School of Library and Information Science and one of the founders of the Carolina Children's Literature Consortium. "It has made USC a destination for the study of children's literature."

That's what Sara Schwebel wanted to do when she arrived at Carolina six years ago. Schwebel, a founder of the consortium and a co-organizer with Martin of the Children's Literature Association's 41st-annual conference at Carolina, is an associate professor in English with a background in U.S. history.

"This conference recognizes the unique way faculty across our campus are coming together in the study of children's literature," Schwebel says.

"We are teaching the same students," Martin says. "So it behooves us to talk to each other."

The consortium meets periodically to discuss children's books and scholarship with faculty members sharing their own expertise or perspective. "It is so easy for us in a large university to become stuck in our own silos," Martin says. "I think this organization has helped bridge some of those gaps."

Schwebel's research, for example, combines her history and literature backgrounds, focusing on the historical truths and myths that can be found in children's literature that has been taught for generations and is still taught today in U.S. classrooms. The result of her research is "Child-Sized History: Fictions of the Past in U.S. Classrooms," published in 2011 by Vanderbilt University Press.

The lifelong impact a standard collection of books can have on generations of American children is a central part of conference forums, some of which are open to the public, including the continued lack of diverse faces in modern children's literature.

According to a study by the Cooperative Children's Book Center at the University of Wisconsin, just 93 of the 3,200 children's books published last year were about black people, and the representation of Latinos and other ethnic groups is equally dire, Schwebel says.

A publishers' panel and subsequent sessions scheduled for Thursday (June 19) afternoon during the conference will look at some reasons why the vast majority of children's books still feature middle-class white "nuclear" families, Schwebel says.

For every "Hunger Games" book that sells millions of copies, there are thousands of books that struggle to get noticed in that vast sea of new releases each year. Plus, there are the tried-and-true materials – think Dr. Seuss and "Goodnight Moon" – that sell hundreds of thousands of copies year after year.

"It is in part a result of demographics and assumptions about consumer behavior – large publishing houses thinking that white families won't buy books about characters that are not white," Schwebel says.

Publishing houses, such as Lee & Low, that publish only multicultural books, also will be at the conference, Martin says.

Carolina's Hollings Library is featuring an exhibit of its collection of children's and young adult literature, including collections from famed storyteller and librarian Augusta Baker, author of an influential bibliography of works for children that accurately depict African-American life. Baker was a friend and mentor to many of the authors and illustrators represented in her collection housed at Carolina.

Immediately after the children's literature conference will be the U.S.-China Children's Literature Symposium, which will bring U.S., Chinese and Canadian scholars to Columbia to present their research on children's literature across cultures and countries. Themed "The Global Child," the symposium is hosted by the university and sponsored in part by the Confucius Institute at Carolina.

The 41st-annual conference of the Children's Literature Association is Wednesday-Saturday (June 18-21). Many of the events are for registered attendees only, but three sessions are open to the public. Visit the conference website for a complete schedule.