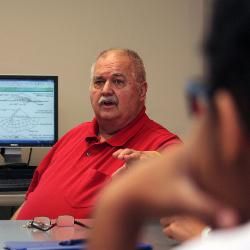 Engineering alumni have honored longtime professor Mike Meadows with a scholarship endowment in his name.

It sounds like a moniker from a 19th-century coming-of-age novel set at some elite college in the Northeast, not the nickname bestowed on a fast-talking civil engineering professor from west Tennessee.

But that is what University of South Carolina professor Mike Meadows' students have called him for more than a decade. A nickname he has taken as his own and abbreviated (he is an engineer, after all) as "DOP."

"Who is DOP?" is a PowerPoint presentation he created to introduce students to his nickname and gives them free rein to use it, regardless of what they think the "D" should represent.

But Meadows also includes his "5 House Rules" in that presentation, including: Be honest, speak your mind and don't be offended when others do the same. Be professional. That last one is key as Meadows teaches the civil engineering capstone course for the College of Engineering and Computing. That course brings together everything the students have learned throughout their college careers and makes them put it to use on a real-world project.

Although the student projects don't actually get built, the students' work is sometimes used by real-world engineers who do build the projects.

It is this course and his worry about who will teach it after he is gone that keeps Meadows at work even after 33 years at the university.

The idea was hatched by Karen Ammarell, student services administrator in civil and environmental engineering, who enlisted her husband, Ray Ammarell, '88 and '89 civil engineering, and the department chair, Robert Mullen.

Karen Ammarell got the idea after seeing Meadows' pocket watch, inscribed with the initials DOP, that was given to him by former student Jennifer Wolters Mancine, '10 civil engineering. "I realized just how special he is to our students," Ammarell said. "I began thinking that a traditional thank-you plaque would not be sufficient."

"He was always just very accessible and willing to talk to you," says Ray Ammarell, one of Meadows' former students and now an engineer with South Carolina Electric & Gas. "He would get something out of you, though. He would say, 'Do me a favor,' and ask you to take something somewhere across campus then say, 'We'll talk when you get back.' "

Engineering professor Charles Pierce, who also is helping raise money for the endowment, says alumni occasionally honor former professors by establishing a scholarship in their names. But, Pierce says, he has never seen it done when the professor is still working.

"What is unique about Mike is the amount of time and effort that he is willing to commit to his students," Pierce says. "It is unusual in a good way. He is the definition of a mentor for students."

If you would like to contribute to the Mike Meadows Civil Engineering Endowment Fund, contact Jeff Verver, 803-777-3612.