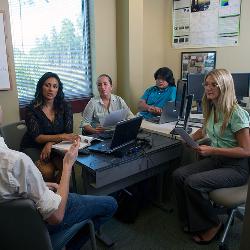 Kasia Pawelek is a mathematician at heart, but it's what the University of South Carolina Beaufort assistant professor of mathematics does with numbers that's making a real-world difference.

As part of an ongoing collaboration with Beaufort County Mosquito Control, Pawelek and her students design mathematical models that help predict what would happen if an epidemic of West Nile virus were to break out in the area.

"First was the love for mathematics," Pawelek says. "But I was always interested in the spread of disease, whether it's within the human body or at the population level, and I wanted to use mathematical models to model the dynamics of such epidemics as influenza or West Nile virus or other viruses."

"Beaufort County Mosquito Control counts the mosquitoes weekly in different traps, then they classify them under different species," she explains. "We take the data for the specific species that carries West Nile virus, and we can compare our modeling predictions with this data to prepare better parameter estimates for the birth rate, the maturation rate of mosquitoes — also the insecticide treatment effectiveness."

The specific species being studied by Pawelek and her students breeds in the catch basins and also in organic freshwater that often accumulates in people's backyards.

She and her students have given talks to the community as well as interviews with local media in an effort to educate residents on how they can do their part to help reduce the mosquito population and therefore help mitigate the risk of a West Nile outbreak.

"When I came to USCB I wanted to do something that was helpful to the local community, for the people who live here, and also something that students would get involved in," she says. "The best way to do that is to select a project that is relevant to our region."