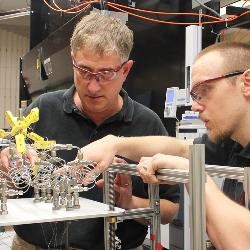 Jochen Lauterbach and Jason Hattrick-Simpers are integrating experimental and theoretical approaches with big-data management in materials science, helping spur even quicker commercialization of the stuff that makes just about everything useful work.

If you're interested in faster iPhones with longer-lasting batteries, cheaper high-octane gasoline that gives off less pollution after your engine burns it, more crashworthy cars with quicker acceleration, and TVs with thinner yet always wider high-definition screens, then you're interested in seeing progress in one of the most generically named of the technical disciplines: materials science.

Materials are the physical pieces of just about everything people find useful. They're the stuff of smartphones, television sets, computers, solar cells, airplanes, bridges, buildings, cruise missiles and pencils.

An automobile is made entirely of carefully engineered materials, from the components of the tires to the metal alloys in the engine to all of the parts that go into its on-board computer. The automobile's fuel is the product of catalysts, which are materials that refineries use to convert crude oil into gasoline, diesel, jet fuel and all of the other highly useful products of petroleum.

Research and development have produced a cornucopia of better materials over the years, and that progress is largely the result of scientists creating, testing and commercializing materials with increasingly complex makeup.

"Computers, in the 1980s, had just a handful of elements in them," says Jason Hattrick-Simpers, an assistant professor of chemical engineering in the College of Engineering and Computing. "But the ones that we have now use just about the entire periodic table apart from radioactive materials."

That increasing complexity builds on a long tradition of making new materials through mixing. Soft iron, for example, becomes stiff steel when properly mixed with carbon. It becomes tarnish-resistant stainless steel with the correct amount of chromium added.

"It's the same with catalysts," says Jochen Lauterbach, a chemical engineering professor in the College of Engineering and Computing and SmartState Endowed Chair in Strategic Approaches to the Generation of Electricity. "When we started putting catalysts in cars, in the late 1970s, we had alumina and platinum in there. Now there are probably 12 or 13 different elements, from rare earth oxides to palladium, rhodium, platinum and copper. The materials get more and more complicated. It's always driven by cost, it's driven by environmental regulations, and it's driven by consumer demand."

Lauterbach and Hattrick-Simpers are among a small group of scientists selected to define the future of the Materials Genome Initiative (MGI), announced three years ago by President Obama. The goal of the initiative is to combine computational and experimental tools to help businesses bring new materials to market in half the time it once took.

"The idea is that computational and experimental tools and our ability to handle large sets of data have advanced to the point now where instead of doing each of them in their own little siloes, we can combine them, creating a research workflow that integrates the three tools in a seamless manner," says Hattrick-Simpers. "By implementing all of these tools together, you're able to accelerate the commercialization of materials.

"There are some really great examples of that. Take the next generation of G.E. turbines. They basically took a process that generally would have taken them almost 15 years and in less than 5 years had a commercialized turbine blade. They integrated the researchers into one group at G.E., used calculations, databases, identified new materials and then systematically worked through experimentally until they had a final material."

Traditionally, theorists would calculate what kinds of properties a never-before-prepared material might have. Experimentalists would attempt to create the materials in the laboratory one at a time and find if their actual properties were as predicted. And that took time.

"In the past, you would make something on Monday and look at its properties, then something else on Tuesday, and so on," says Lauterbach. "But with high-throughput experimental techniques, you're able to look at many different samples in one experiment."

Lauterbach and Hattrick-Simpers have been developing techniques in high-throughput experimental research for years now.

"If you look at experimental high-throughput data generation, taking Jason's thin-film materials expertise and my catalyst expertise together, the two of us combined are one of the strongest groups in the country," says Lauterbach.

That leadership was recently recognized at a workshop supported by the White House, where the two were tapped to help determine the future of high-throughput materials science in the MGI.

"What our workshop was devoted to was identifying the key stakeholders at national labs, academia, and industry," says Lauterbach. "Everybody who's working on all types of advanced materials, whether solar cells or catalysis or semiconducting materials, and saying 'look, we are going to get together and identify key data formats, key necessary experimental resources and key technological hurdles that the community can all agree to advance materials discovery.' That way we'll all be benefiting from one another's work."

"It's workforce development," says Lauterbach. "This approach is really being embraced by industry, and students that are trained in this high-throughput data generation approach come out of our labs with many job offers.

"They will keep the U.S. at the forefront. They are going to define, develop, and invent the new materials of the 21st century."