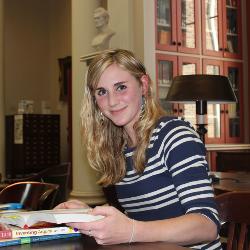 When she was very young, Monica Bowman would pore over the pages of her dad's history textbooks from college, intrigued at first by the pictures and, later, by the accompanying stories.

It's no surprise, then, that she's majoring in history as an undergraduate at Carolina — and delving into the story of an historical figure from the Palmetto State's past. Bowman is a rising senior and a Magellan Scholar, the 1,000th student to receive the Office of Undergraduate Research award in the nine-year history of the program.

"The term 'reconstruction' is interesting to me — what the reconstruction of a country entails and how the word still resonates," says Bowman, whose family lives in the history-steeped locale of Beaufort, S.C. "I knew I wanted to do a project on Reconstruction, and Gleaves' name came up a couple of times in my initial readings."

Bowman's goal is to write a scholarly paper about Gleaves, a Philadelphia native born to Haitian and English parents in 1819 who would later become a congressman and serve as the 55th lieutenant governor of South Carolina. In addition to his political activities, Gleaves was a Prince Hall mason who constructed a black fraternal hall in Beaufort that's now called the Sons of Beaufort Lodge.

Historian Melissa Cooper, a research assistant professor in the university's Institute for Southern Studies, encouraged Bowman to apply for a Magellan Scholar award and is serving as her faculty mentor throughout the yearlong project.

"Monica's research promises to uncover historical evidence that will help to contextualize Gleaves' political ambitions and the impact of his political activities in South Carolina during Reconstruction," Cooper said. "To date, Gleaves has made 'limited appearances' in historical monographs, and little attention has been paid to the forces and ideas that compelled him to pursue political life in South Carolina. Any new information that Monica uncovers will certainly enhance our understanding of African-American history and Southern history during the period."

Bowman is completing a semester's worth of academic credits this summer — part of the university's new On Your Time initiative that's transforming summer sessions into a third semester of learning — and will present her Magellan project next spring at Discovery Day. Graduate school and a career in teaching history are next on her agenda, Bowman says.

The Magellan Scholar program was established in 2005 to enrich the undergraduate experience with research opportunities in all disciplines. About $2.7 million has been awarded to 1,065 undergraduates from all eight campuses. About half of the awards have gone to science and engineering students; one-fourth to social science students; and one-fourth to students in the humanities, the arts and business.

Visit Carolina's Promise to learn how you can help support undergraduate research opportunities through the Magellan Scholar Program.