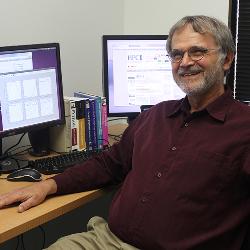 A matter of time

Cutting an experiment's time from three months to three days is every researcher's dream. Phil Moore and his team in Research Cyberinfrastructure did just that for a Carolina scientist running a computer simulation.

As an environmental scientist, Sean Norman spends plenty of time in the field and in the laboratory, but his research also depends heavily on time spent in silico — that is,  the time it takes for computer analysis and simulations.

A heavy user of BLAST, a software tool he uses to guide his research of microbes, the associate professor in the Arnold School of Public Health has invested in a heavy-duty personal workstation to crunch the numbers.

"Sean has a pretty powerful office workstation — I believe it has 12 cores," says Phil Moore, director of Research Cyberinfrastructure (RCI) at the University of South Carolina. "But to run one of his typical simulations on that workstation would take about three months."

Moore and the RCI team helped to greatly improve on that.

"We made modifications to his software algorithms to increase efficiency, and then provided support for him to run his BLAST simulations on our local high-performance computing cluster," Moore says. "He uses 60 cores on our system and was able to decrease the run time from about three months to three weeks. But that's still not fast enough."

RCI, through the National Science Foundation program Extreme Science and Engineering Discovery Environment, can provide access to national supercomputing center resources. A researcher doesn't need to have an NSF grant for access, just a university affiliation, a project that would benefit from added power, and RCI's expertise.

"We have access to many supercomputers nationwide — at national labs and universities — so we set him up on the 'Stampede' supercomputer at the University of Texas-Austin," says Moore. "On that cluster, he can use 800 cores. We were able to decrease his run time from three weeks to three days."

Moore has been part of the Carolina community for many years now, earning bachelor's and masters degrees in computer science and, while working for the university, a doctorate in geology. Computers remained at the center of his work, but he found satisfaction in using them as tools to answer real-world research questions.

"I worked on my master's as a research assistant in the geology department studying under Chris Kendall and funded by an industrial consortium. There were about 10 petroleum companies in the consortium. I enjoyed applying my computer science knowledge to the research projects, rather than focusing only on computer science," he says. "My MS topic was image processing and machine intelligence and had nothing to do with geology, but the timing was right to go ahead and pursue a Ph.D. in geology because it was more of an applied science which really interested me."

In 2008, he moved to the Savannah River National Laboratory as their scientific computing manager, but the challenge of building an invaluable new framework at his alma mater brought Moore back to Carolina four years later.

"I really enjoyed working for the Department of Energy, but there was an opportunity here to establish a research cyberinfrastructure group," says Moore. "When I returned a year and a half ago, it was basically a starting point to form a new campus HPC group."

Sagona had overseen high-performance computing in the College of Engineering and Computing for eight years, Elger has a strong industry background in systems and networks and Torkian is skilled in software engineering and development. The three have overlapping and complementary skills that make for a strong team, Moore says.

The RCI staff is always looking for ways to integrate Carolina students in the process, with three undergraduates from computing and engineering working with them on a variety of projects.

"We're a university, so to me, having students working with us and learning the newest technologies is really one of the primary reasons we're here — to give them a hands-on and challenging work environment," says Moore.

From the other side of the interview table, he has seen firsthand how useful that experience can be in the job search.

"Before I left USC, I knew two students working here on scientific computing projects using the Linux operating system, and when I moved to Savannah River my group had two openings. Students from a several universities applied, including the two from USC," he says. "I tried to stay neutral. After the group interviewed and evaluated all of the applicants, the two people hired were from USC. I believe it was because they had both worked as part of a team on real projects — that was very important to have on their resumes."

With student, staff and administrative support, RCI is a growing resource for researchers throughout the university.

"The goal is to establish a campus organization that best fits USC," he says. "We still need the support resources in each college, but the university also needs a solid campus-level infrastructure supporting scientific applications and high-performance computing for research."

Email the RCI team to see how they can help your researchers with a variety of cyber needs.