As a Gamecock, my ingenuity has No Limits 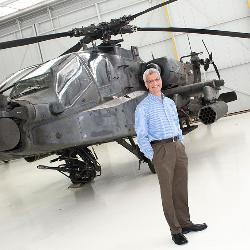 It's a routine training mission. But nothing's really routine when a pilot pushes a U.S. Army Apache combat helicopter to its limits. With a top cruising speed of nearly 200 mph and a vertical climb rate at well over 2,500 feet per minute, a pilot must have complete confidence in the aircraft. That security is based on a well-informed ground crew that uses real-time diagnostic sensors to monitor the operating conditions of the chopper's drivetrain.

This innovative approach to aerospace safety was launched at the University of South Carolina's College of Engineering and Computing in the 1990s when researchers like Abdel Bayoumi partnered the South Carolina Army National Guard to conduct cost/benefit analyses of their Health and Usage Monitoring System implementation.

"We learned that helicopters should be serviced based on need rather than a set schedule," Bayoumi says about the initial research. "We were also able to show significant cost savings from this new approach."

That was the launch of USC's Condition-Based Maintenance research initiative, which is now a vital part of keeping the military's helicopter fleet in top working condition. "This has been a highly beneficial partnership since its inception," says retired Maj. Gen. Lester Eisner of the South Carolina National Guard. "Condition-Based Maintenance has vastly improved our readiness and reliability."

"Our test center is quite unique," Bayoumi says. "No other university has a lab like ours. Not even the U.S. Army can duplicate what we can do in our lab."

Working in collaboration with the Army, Carolina has helped to improved the overall performance and maintenance of several military aircraft, among them the Apache, Black Hawk and Chinook helicopters and the V-22 Osprey tilt-rotor aircraft.

The results have been noticed.

"Our success has gotten the attention of numerous aerospace leaders, such as Boeing, Bell Helicopter, Sikorsky and AugustaWestland, all seeking our expertise and assistance with new lines of production," says Bayoumi. "Just like the Army, these companies look to USC as an integral partner," Eisner adds.

New partnerships are also developing with wind and gas turbine manufacturers and the nuclear power industry.

For nearly two decades, the CBM program has experienced tremendous growth. However, Bayoumi and his colleagues gauge their work not by the number of new contracts but by the confidence they see in the faces of pilots and ground crew technicians on military bases throughout the country.