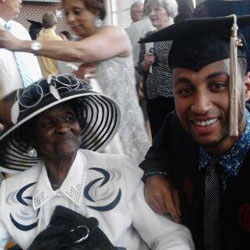 Steven Gantt is the first among nine siblings to graduate college — but he's the first to point out that he couldn't have done it without the support of his whole family.

You could define Steven Gantt with "firsts" and "lasts" — first in his family to graduate college, first to travel extensively outside of South Carolina, last of nine children.

But here is the word Gantt uses to define himself — family. "Without them, none of this would be possible at all. There was so much sacrifice," says Gantt, a May 2014 graduate of the Darla Moore School of Business who double-majored in human resource management and marketing and minored in media arts. In his last year at Carolina, Gantt's mother took on a second job to help support him.

"That crushed me, but it also motivated me to lay everything on the line so that all those years of study wouldn't be in vain," he says.

Gantt hails from Ward, S.C., a town so small, he and his family comprise 10 percent of its population. He completed an internship with Regions Financial Corp. in Birmingham, Ala., traveled from the Midwest to the West Coast and finished his last semester on the dean's list. After graduation, he immediately started work in a promising job.

Gantt landed a position in the future leaders program at Amica Insurance Co., a Rhode Island-based insurer. He's working on earning an adjuster's license, taking a crash course in business, contract and insurance law. He's at one of the company's regional offices in Greenville this summer and heads to Rhode Island this fall.

"I hadn't done any traveling before I came to USC. For me to be able to go to these places, then to talk to my friends back home and encourage them to be successful — that's pretty special," he says. "With me being the first person to go to college, it was the first time for my family to experience things. I think my family is living vicariously through me."

Gantt will spend the fall and early winter in Rhode Island, his first venture up north.

"It was 85 degrees in Columbia back in April when I first flew up to Rhode Island, and it was 35 there," he says. "I'm going to have to get used to the weather."

In 2015, Gantt will have finished his initial training and will probably relocate to another of the company's offices, perhaps in Seattle, Denver or Los Angeles.

"I'm only 22 now and can only imagine what is yet to come," Gantt says.

One thing seems certain: More firsts are likely. "One thing I don't have yet is a passport," he says. "I would be the first person in my family to leave the country."