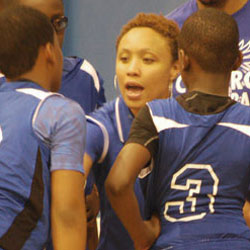 Her Amateur Athletic Union boys team is heading for the national tournament this summer.

March Madness is over, but Tiye Gordon's basketball team is still revved up — they won their state tournament and are headed for the nationals in July.

Gordon, a Ph.D. student in the University of South Carolina's history department, has found that coaching youth league basketball is the perfect counterweight to the stress of pursuing a doctoral degree.

"It's very therapeutic," says Gordon, who was a Ronald McNair Scholar at St. Lawrence University in New York before starting graduate studies at Carolina. "All of my spare time outside of studying and reading and writing for my Ph.D. is immersed in coaching."

As much as she enjoys the diversion of coaching young people in a game that she still loves, Gordon's real passion is for history and giving voice to youth of color. Those interests intersect in another volunteer project she has taken on this summer.

"I'm studying African-American history and 19th-century consumer society — particularly the history of buying and selling mixed-race women for the sex trade," she says. "It's a heavy topic that dovetails with my interests in how images and stereotypes of female beauty play out today."

To that end, Gordon is gearing up to lead a month-long program in Northeast Columbia for 14- to 16-year-old girls, the #Nofilter Project, that will examine elements of African-American beauty and contrast them with media portrayals and societal perceptions.

To learn more about the #Nofilter Project, contact Tiye Gordon. To learn how you can help support scholars like Gordon in our College of Arts and Sciences, visit Carolina's Promise.