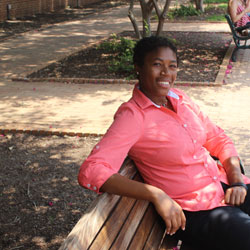 Stuttering is no longer an obstacle for UofSC instructional designer.

You might not notice, but Aisha Haynes stutters. And she doesn't mind telling you so. After all, stuttering has helped shape who she is today, not just personally but professionally.

An instructional designer at the University of South Carolina's Center for Teaching Excellence, Haynes first came to Carolina as an undergraduate, thanks in part to the TRiO program for lower-income students. She has since received a bachelor's in integrated information technology (2004), a master's in educational technology (2006) and a doctorate in curriculum and instruction (2012), all from Carolina.

Along the way, the Orangeburg, S.C., native also worked her way up the campus ranks, spending four years as an instructional technology manager at the Darla Moore School of Business, where she was at one point named the staff person of the year, before joining the Center for Teaching Excellence, where she now helps faculty design online courses and manages the distributed learning program.

Recently, Haynes has even begun helping her former dissertation chair design an online course. "I've actually helped quite a few of my former professors over the years," she says with a smile.

Before 2007, however, nobody, not even her own family, knew that Haynes sometimes had difficulty speaking.

"Nobody knew that I stuttered until seven years ago, nobody at all but me," says Haynes, now 31. "My parents didn't know. I covertly stutter. I'm very good at hiding it. I can switch out words in my head. I can do various tricks that I've developed over the years."

Those "tricks" began in high school, she says, shortly after her stuttering's onset, when she found herself suddenly having trouble saying certain words and making certain vowel sounds. Most poignantly, she even had trouble saying her own name.

While she was an undergraduate, her stuttering mysteriously stopped, but it returned after college when Haynes took a position as a computer technician and network assistant in Orangeburg Consolidated School District 5.

"I didn't really have to say my name much because I wore a nametag. I could just say, 'Oh yeah, I'm here to fix your computer,' and a lot of people there already knew me because I went to school there," she says. "But then when I went to work at the Moore School I had to introduce myself to a lot of people and I had trouble saying my own name."

Finally, she experienced the one thing she had been avoiding all those years.

"I went to visit a faculty member and had a 30-second block where I couldn't say anything at all," she says. "That was the first time I had a block in front of somebody."

After that, Haynes confided in a friend, who put her in touch with Charley Adams, a speech and language pathologist and faculty member in the university's Department of Communication Sciences and Disorders, who began helping her through the emotional challenges associated with stuttering.

Since then, she has confronted her stuttering head on, joining the National Stuttering Association's local support group and even giving a speech at the association's annual conference last year.

Haynes also credits stuttering for the patience she needs to do her job effectively and for her particular interest in making online courses more accessible to students with disabilities.

"Stuttering is considered a disability even though I don't really consider my stutter as a disability," she says. "I'm just very sensitive to people who have different needs, especially those who may have certain challenges to overcome."

To give back to her alma mater and employer, this past year Aisha Haynes established a new scholarship fund to assist rising seniors in TRiO programs at the University of South Carolina who have at least a 3.0 GPA and who have shown exemplary university or community service. Contributions to the Dr. Aisha S. Haynes Endowed Scholarship Fund can be made through Carolina's Promise.