Education of a teacher 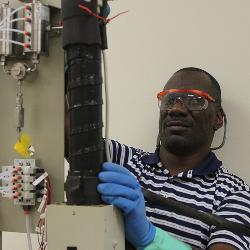 Working on a chemical engineering project that might provide relief for asthma and allergy sufferers, Odell Glenn Jr. is also a caregiver for his father, a minister at an A.M.E. church and president of the Gamecock Toastmasters.

Push and pull have helped move Odell Glenn Jr. through a wide-ranging career in engineering. He has pushed to follow his passions, he has been pulled in unexpected directions and he finds himself at the University of South Carolina as a late-career doctoral candidate. He says he wouldn't have changed the journey in any way.

Growing up in Brooklyn, N.Y., Glenn developed an affinity for science and mathematics early on, and he focused his studies in those areas at Samuel J. Tilden High School in East Flatbush. It wasn't just the subject matter that attracted his interest, it was the process.

"I now know that I really love to solve problems," he says, "and technical problems most of all."

Glenn's success in high school science and math was a solid foundation for study at SUNY Stony Brook, where he earned a bachelor's degree in mechanical engineering. He followed up with a master's degree at the New Jersey Institute of Technology in manufacturing engineering.

Starting with a job at ABB Combustion Engineering in Windsor, Conn., he worked as an engineer for more than 10 years at several companies in the Northeast. But it was his part-time job at that time that piqued a desire to return to school.

"I taught part-time as an adjunct at various community colleges," he says. "That's what made me realize that teaching was my passion. So I went back to New Jersey Tech and got another master's degree, this time in electrical engineering."

The breadth of his training in engineering, covering three sub-disciplines in the field, earned him a permanent position at Manchester Community College. In five years there, he enjoyed teaching and recruiting students, working with Project Lead the Way (a nationwide program that provides engineering courses for junior high and high school students), and working through the college with the state of Connecticut to increase the number of manufacturing jobs in the state.

The teaching fueled his desire to study the learning experience and find new ways to improve it. "I had decided that I wanted to go back and get a doctoral degree," he says. "I wanted to do a Ph.D. in engineering with a research focus on engineering education, and I got a full ride at Oregon State to do that. So I went to Oregon State for one year — and that's when life began to happen for me."

His parents suddenly needed help. They were both retired and moved back to South Carolina after more than 40 years away — his father had grown up in Aiken and his mother in Ridge Spring — but his father became ill, and the situation was more than his mother could handle alone.

"It's something I never expected to do," Glenn says. "I came back to the East Coast and took on the responsibility of caregiving."

Glenn found that being with his family had its own rewards, and he was soon able to further his education at the same time in yet another branch of engineering. Since 2011, he has worked with College of Engineering and Computing professor Mike Matthews in the department of chemical engineering.

"He also has interest in educational engineering research, but both of us decided it would be best to do a hard-core engineering research project, and then I can branch off from that afterwards," Glenn says. "And I'm glad I did that. It has really panned out."

Glenn is a key contributor to a research project that offers new hope to asthma and allergy sufferers. Matthews is developing a technology that uses carbon dioxide to clean carpets, upholstery and bedding of dust mites and other allergens. The process is "dry" and the needed equipment can be readily transported to homes for onsite cleaning. Glenn has studied how essential oils, such as tea oil, might be mixed with carbon dioxide to enhance allergen deactivation and help increase the amount of time it takes dust mites to re-infest fabrics.

The doctoral project adds chemical engineering as yet another area of expertise to his resume. But research is just a part of his life as a student at Carolina, which includes spending quality time with his parents every day, serving as a minister at New Bethel A.M.E. church in Lexington, and even finding time to participate in Gamecock Toastmasters, which recently elected him president.

"As a nontraditional student, life has its twists and turns," he says, "but it's all working out together for the best now."

Read our story about the groundbreaking research being done by Odell Glenn and engineering professor Mike Matthews to help asthma and allergy sufferers.