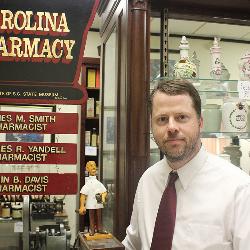 As food allergies in children have become more common, College of Pharmacy researcher Bryan Love led a team that showed antibiotic exposure in infants is associated with increased likelihood of later food allergy.

When it comes to food allergies in children, Bryan Love sees the subject from two perspectives: as a scientist and as a father. The view from both angles would benefit from more clarity, and the clinical associate professor in the South Carolina College of Pharmacy is doing his best to help bring things into focus.

Love has spent the past two years leading a research team that has uncovered what may be one of the root causes of the recent uptick in food allergies, which increased almost 20 percent in children from 1997 to 2007. He and an interdisciplinary team of researchers at the University of South Carolina have shown that early exposure to antibiotics in infants is associated with an increased chance that they will later develop one or more food allergies.

The inspiration for the research came, in part, from his own experience as a parent.

"I have two small children, and they don't have food allergies, thankfully, but there was definitely an attraction to want to do the research because of my own kids," he says. "A few years ago, my wife and I were doing a lot of reading on introducing foods to kids. There are a lot of theories out there, most of which are untested, about when to expose a child to peanuts, for instance, or when to introduce eggs."

Timing could well be key. Allergies are the result of an overzealous immune system, and that immune system develops as a child grows. A working hypothesis that too-early exposure to peanuts, dairy, eggs or the like might be harmful to a youngster's immature immune system is commonplace in a variety of parenting books.

One important factor involved is the developing community of microorganisms in a child's belly. Because bacterial cells are so much smaller than mammalian ones, the number of bacterial cells in a person's gastrointestinal tract, termed the microbiome, is estimated to outnumber the total number of human cells in an adult's body by about 10-to-1.

The trillions of cells in the gut are an ecosystem of many different kinds of microbes, and over the past decade scientists and physicians have come to recognize that changes in the microbial flora can affect health. Because antibiotics kill all kinds of bacteria, including those in the digestive tract — not just the specific ones that are targeted when a doctor prescribes penicillin for an ear infection or pink eye, for example — they have the capacity to disrupt the microbiome.

"We're basically working on the theory that the bacteria within our gut are important to the development of a normal immune system and immune response," Love says. "We think that repeated antibiotic exposure can alter that microbiome in a way that may lead to the development of food allergy."

Using retrospective Medicaid data of South Carolina children, the interdisciplinary team — which included physicians Joshua Mann and David Amrol of the School of Medicine, biostatistician James Hardin of the Arnold School of Public Health, and faculty members Christina Cox and Kevin Lu of the College of Pharmacy — showed that children exposed to a course of antibiotics in the first year of life had a higher chance of developing food allergy.

"There was almost a one-and-a-half times increase in the odds of developing allergy compared to controls," says Love.

The effect was also dependent on the extent of exposure. With three or more courses of antibiotics, there was an even stronger association with developing one or more food allergies.

The data were compelling enough to earn the team an ASPIRE-II grant from the Office of Research to expand the study. They will soon work with a much larger data set of 1 million to 2 million patients from 30 states, which will allow them to bolster their statistical methodology and address other diseases and health problems that could be affected by antibiotics in the microbiome. Those might include obesity and digestive diseases such as celiac disease and Crohn's disease, Love says. The team will also do a pilot study comparing stool samples of children with food allergy to determine if any differences in the microbiome exist.

But the primary focus will be on better understanding how to find solutions for a widespread problem that is only getting worse.

"It's estimated that 4 percent to 8 percent of children will develop a food allergy, which means that in a class of 25 students, one or two students probably have one," says Love. "In the last 20 years, there's been a significant increase in the prevalence of food allergies. If we can figure out what might be causing this increase, we might be able to determine which patients might be at higher risk and develop treatments to alter the likelihood that they develop food allergy later in life."