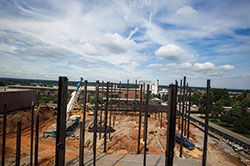 My Carolina is reaching new heights for alumni and student engagement with its building of an Alumni Center in the Vista. The ceremonial placement of a tree at its apex marks the completion of the "steel" framing.

When A.C. "Bubba" Fennell III launched a house-hunting quest 14 years ago, he had no idea it would take so long to find the perfect home.

The current place was too small, needed expensive renovations and, worst of all, had no parking for the 280,000-plus family friends who wanted to visit. But thanks to the efforts of Fennell and several others, the move-in date for the My Carolina Alumni Association's Alumni Center — the new campus home for all Gamecock alumni — is next summer.

"The timing is just great. Everybody is excited to have a new center that's going to bring everybody together and help get our alumni even more engaged," Fennell said. "It's been a long time coming, but I think it's going to be a great addition to the University of South Carolina and our alumni."

The My Carolina Alumni Association has moved to several locations on or near campus in the past decade and a half, but the search for a permanent home began gathering steam when former alumni association president W. Lee Bussell found a great location at Senate and Lincoln streets. Then a plan was presented to university President Harris Pastides who expressed his enthusiasm for the project.

"When President Pastides showed support, we were able to work things out," said Fennell, a 1972 graduate and former president of My Carolina's Board of Governors, and now a member of the university's Board of Trustees. "We started looking back in 2000, but the president's support was the key element to making it happen."

In November 2013, Robert "Eddie" Brown, president of My Carolina, dipped a shovel into the ground on the day of the historic groundbreaking for the new center. Today, the project is becoming a reality as construction is in full swing, and the structural steel outline of the building is taking shape on the Columbia Horizon.

"As the foundation for the building is being built, we're also putting the foundation into place to fund it," says Paula Harper Bethea, the association's incoming president. "You can see that building really come to life."

The $26 million project will be funded by alumni, for alumni, entirely with private donations. While the association has secured financing necessary to complete the project, the goal is to retire that debt within the next decade.

"It sounds daunting, but we're positive that we can do this. We've got the enthusiasm, and we've got the right people," Bethea said. "We have a small army of alumni who love My Carolina, and they are all going to play a vital role.

"We can build the greatest building in the world, but it's the people and activities that take place in that building that will make it succeed."

Although it's been at least 14 years in the making, both Fennell and Bethea said now is the perfect time for the center to rise up.

"We are overdue but this is the right time. There's never been a time in the history of our university that has been more dynamic than right now, and we can take advantage of that energy and that focus," Bethea said.

The new Alumni Center will be built with help from private donors and alumni. Find out how you can support My Carolina and its new home at Carolina's Promise.