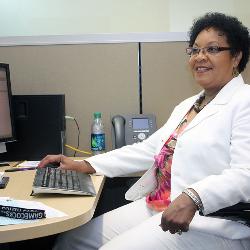 Julia Witherspoon says she loves the natural light that reaches her desk in the new Darla Moore School of Business. Witherspoon has worked at UofSC for 40 years.

Julia Witherspoon is a sucker for something new: a new opportunity, a new responsibility, a new center or even a new building. New has oddly been a theme of her nearly 40-year career with the Darla Moore School of Business.

This month, she has experienced new once more as the faculty and staff of the business school have begun moving into their new home at Assembly and Greene streets.

"I was here when it was just the Close Building," Witherspoon says from her new state-of-the-art office space. "It was exciting when we added the Hipp part of the building and this is exciting, too."

Witherspoon joined the University of South Carolina in 1974, working in minority student affairs, then she moved to the College of Education before joining the business school in 1976.

There, she found her home.

Witherspoon credits then-business school dean James Kane with making her feel at home and a part of the team.

"With him, there was no color," she says. "It was just Julia Moton."

Julia Moton, as she was known when she started, was the seventh of 14 children and grew up in tiny McCormick, S.C. She came to Columbia to attend Columbia Junior College and earned her associate's degree. Her first job was in state government in the classification and compensation department.

"One reason I came to the university was the opportunity to take classes and to grow," Witherspoon says.

Over the years, as her job responsibilities have changed, she has learned computer systems, budgeting, state procurement rules and honed her communications and supervisory skills.

"I grew with the job," she says. "I made this my favorite job because of the students, the faculty I work with. My co-workers are phenomenal and I enjoy helping my colleagues."

It was that desire to help that led Witherspoon to stay on when the Moore School was creating the Center for Global Supply Chain and Process Management. The consortium of businesses and organizations partner with the Management Science department, which provides faculty-led consulting work to the companies. Students get an opportunity to put the skills and knowledge they have learned into practice and the partner firms get the benefit of the consultation. On average, the center saves businesses about $900,000 a year.

"I originally was going to stay just until the center was started," Witherspoon says. "Then I was very excited by what we were doing there and wanted to stay on a little longer. Then it was 'stay on until we move into the new building.' So now we're here."

Jack Jensen is managing director of the center and says it would not operate as well without Witherspoon's gentle guiding touch.

"She has a great heart for anybody who needs her assistance," says Jensen, who first met Witherspoon 20 years ago when he was working on his Ph.D. at Carolina. "She is the hardest-working person I know. She is definitely irreplaceable."

Witherspoon says she really means it this time when she says three more years. She will hit that magic retirement age of 65 and has plans to travel with her husband, the Rev. Lavern Witherspoon. The two take a cruise at least once every two years.

"No telephone," she says of being on a ship in the middle of the ocean. "Nobody can reach me and I really enjoy the quiet time with my husband. Nobody can reach him either."

Witherspoon also works with the Women's Missionary Society of the African Methodist Episcopal Church and is editor of its newsletter. She also belongs to the African Methodist Episcopal Connectional Ministers' Spouses, Widows and Widowers organization, Plus P.K.'s, Interdenominational Alliance of Ministers' Wives and Ministers' Widows of Columbia, Star Light Chapter #364 O.E.S. and Cairo Court #125 Daughters of Isis. She also serves on the Capital City Club membership committee.

"I like to be involved," she says. "I love my community service."

She gets her energy from her three-times-a-week workouts that she has been doing since 1980.

After retirement, she says, she plans to be more involved in two other local philanthropies, Hannah House and Harvest Hope Food Bank, which saw its stores of food depleted often during the recent economic downturn. It was exciting for her when the Global Supply Chain Center did an improvement project for the Harvest Hope Food Bank in the Midlands.

"But for the grace of God, that could have been me," Witherspoon says of the folks having to visit the food pantry for their first time in their lives. "I have been blessed to be able to work continually for 40 years. And I have been blessed that the university has allowed me to continue my employment."