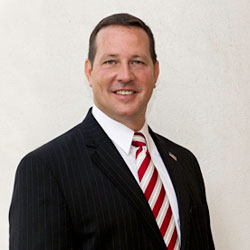 Pat Keegan went from track and field standout to field agent in the U.S. Secret Service.

But he calls his latest assignment as assistant special agent in charge of the Columbia field office one of the best of his 25-year federal career. That might have something to do with the fact that he was able to buy season tickets for the upcoming Carolina football season for the first time since graduating from the university in 1989.

"I'm a big Gamecock sports fan," says Keegan, a native of Washington, D.C., who came to Carolina to play baseball and made the team as a preferred walk-on freshman. Then as now, the Gamecocks were highly ranked and had plenty of talent in the dugout, which resulted in little time on the field for Keegan.

"So a USC track team dorm mate suggested I try throwing a javelin. I had pitched baseball and quarterbacked football in high school; it was just a matter of paying attention to veteran throwers, experimenting with my own throwing motion and plenty of practice in a short period of time," Keegan says.

He turned out to be a natural at hurling the two-pound steel spear. At his first conference meet, Keegan took first place and later set a Gamecock distance record for javelin throw — 213 feet — that held for seven years and is still No. 3 on the all-time list. His earned an athletic scholarship for the rest of his time at Carolina.

"Looking back, I wasn't so serious about my studies my freshman year, but University 101 helped me a lot," Keegan says. "Realizing I wasn't going to be a professional athlete, I focused on my studies and made the dean's list for the remainder of my time at Carolina."

After graduating with a psychology degree, Keegan was recruited by the federal Office of Personnel Management to conduct background investigations for civil service jobs. He transferred to the Federal Aviation Administration as a criminal investigator before joining the Secret Service in 1996. In his 18 years in the Secret Service, Keegan has investigated bank fraud and counterfeiting of U.S. currency and served on a joint task force with the FBI to investigate terrorist bombings of U.S. embassies in Africa in the late 1990s.

In Columbia, he's focused on partnering with state and local law enforcement agencies to combat financial institution crimes, identity theft, cyber and electronic crime and to coordinate protective threat investigations and protection visits to South Carolina, including the president and vice president and their families, and all foreign heads of state.

Given the Secret Service's penchant for periodically reassigning agents to different tasks, Keegan's assignment in Columbia can't be called permanent. But he's enjoying every moment of it for now, especially the opportunities to take in a Gamecock ballgame every now and then.