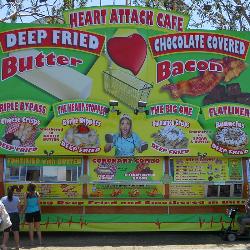 Sue Lessner in the School of Medicine is working to reduce the risks of unhealthy habits that put South Carolina in the heart of what's called the "stroke belt."

Heart attacks and stroke strike suddenly, killing and incapacitating without warning. And there aren't many places where the problem is worse than it is in South Carolina.

"We're in what's called the 'stroke belt,' " says Sue Lessner. "Currently we're ranked No. 4 or 5 in terms of the states with the highest per capita incidence of stroke and the highest rate of stroke deaths. We're also near the top of the list for cardiovascular disease. We're kind of at the epicenter."

An associate professor in the School of Medicine, Lessner is doing her best to help reduce the incidence of strokes and heart attacks. Her laboratory is focused on atherosclerosis, an illness that often goes unnoticed for years and can cause the unexpected onset of both ailments.

"Atherosclerosis is the disease underlying the majority of heart attacks and ischemic strokes," Lessner says. "A key feature of atherosclerosis is plaque building up in the arteries. Most people in Western societies have some level of plaque buildup by the time they're in their late teens or early 20s, and it progressively increases."

There are a number of risk factors for plaque buildup that are controllable, including a high-cholesterol, high-fat diet, high blood pressure and smoking, Lessner says.

The plaque that builds up on artery walls is a complex mixture of biological components that she compares to a pimple or a boil. There's an inflammatory core covered by a fibrous layer, or "cap," that seals it against the arterial wall.

As long as the fibrous cap is intact, it might take decades for a problem to become evident.

"You really only have symptoms of a plaque when it's occupying more than 75 or 80 percent of the artery's cross-section," she says. "You can have a plaque that is filling in 50 percent of your artery, and you won't know it. It's not symptomatic at that point — you don't have chest pain or anything like that."

But the absence of symptoms doesn't mean there's no danger. The plaques can rupture, exposing the material inside to the flowing blood, which will quickly form a clot at the site. If it's large enough, the clot might cut off blood flow, or it could break off and float downstream and lodge in a smaller blood vessel, cutting off the blood flow there.

"When you hear about people who had a sudden, massive heart attack without any previous symptoms or history of it, a lot of times it's from a plaque rupture, because the plaques that rupture aren't necessarily ones that cause symptoms," Lessner says.

Lessner is trying to help physicians better predict when a plaque might rupture, and she's doing it with a distinctive approach. A biomedical engineer by training, she and her students use many engineering tools and techniques to better understand cardiovascular disease progression.

They're applying the basic principles of material mechanics to the clinical situation, which is essentially a mechanical failure in the artery.

"The classic demonstration of material fatigue is to bend a paper clip a few times. Initially it's very difficult to bend, but after a few bends it will just break," Lessner says. "That's what we think contributes to plaque rupture. Every time the heart beats, the artery expands and contracts, and you're putting stress on the edges of the plaque, where it could rupture. We want to predict — for a given blood pressure, for a given heart rate — how long you have before failure occurs."

Using funding from an ASPIRE-II grant from the Office of Research, Lessner has set up a collaboration with physicians in Greenville. They're providing plaques removed from the carotid arteries of patients who had such severe blockage that the invasive operation, an endarterectomy, was called for.

Lessner and her team are subjecting the plaques to mechanical tests to determine a range of material properties. Those data, along with imaging data of the carotid arteries in the patients before the surgery, could be the basis for developing a computer model that would be invaluable for clinicians.

"A long-term goal is to have a predictive tool," Lessner says. "So with the imaging data and some baseline measurements — like gender, blood pressure, risk factors, clinical measurements and the blood flow in the carotid artery — we will try to predict the risk of that person having a plaque rupture."

To learn how you can support research like Sue Lessner's work to help prevent strokes and heart attacks, visit Carolina's Promise.