Is Taylor Swift a Gamecock? 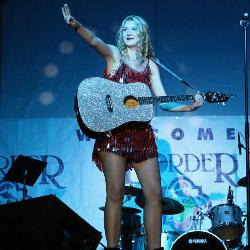 Elizabeth Scarborough is spending her summer touring with the Legends in Concert series as the Taylor Swift tribute artist.

A University of South Carolina student is topping the pop charts... sort of. Her nightly alterego is. Meet Elizabeth Scarborough: college student by day, pop sensation by night. She's spending her summer touring with the Legends in Concert series as the Taylor Swift tribute artist.

Her looks are undeniably similar to those of the blonde beauty with those famous red lips. Her talent? Taylor Swift would be proud.

The Charleston native says she has been singing since she was a little girl and Swift was on her playlist before the rest of the world found out about her.

"I was 12 years old and stumbled across some of her songs on the Internet," says Scarborough. "Like most girls my age, I was hooked. I began constantly singing her songs and mimicking her style and persona in middle school."

She's an even bigger fan now.

"Seeing Taylor in concert never ceases to amaze me," Scarborough says. "She has an incredible, angelic aura on stage that draws you in and amazes you until the show is over."

Now, Scarborough's job is to portray all that she loves about Swift as closely as possible. And it's a full-time job.

The public relations major performs at nine concerts a week and attends promotional events like radio and television appearances. She also keeps up with fans on her social media pages and gets out and meets them one-on-one. Her summer has been packed, but she has loved every second of it.

Scarborough got her start by publicizing herself as a Taylor Swift tribute artist. People always commented on their similar appearances and Scarborough was singing Swift's songs anyway. She created a Facebook page to share her pictures and videos. Less than a month later, she caught the eye of Legends' Myrtle Beach, S.C., manager. After an audition and approval by headquarters in Las Vegas, Scarborough had the job.

She is always working on her vocals and Scarborough couldn't be more grateful for the opportunity. Her motivation and passion for the project comes from more than fandom – she sees music as "one of the greatest things on the planet."

"Creating something beautiful out of your voice or instrument is such a unique challenge. There are always more songs to learn and always the opportunity to become better."

Scarborough plans to graduate in the spring and continue performing as a tribute artist. For now, she's enjoying meeting other artists and fans and sharing Swift's music with them all.

"I feel so blessed to get to bring Taylor to the stage every night."