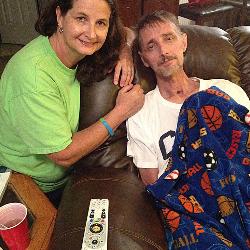 With his wife, Kit, by his side, Chad Shelton is recuperating from a months-long bout with Guillain-Barré syndrome.

All the things most of us take for granted — walking, eating, breathing — Chad Shelton lost the ability to do in the space of a week.

The 48-year-old library specialist at the School of Medicine contracted a rare autoimmune disorder, Guillain-Barré syndrome, in January that short-circuited his nervous system and put him in the hospital on a ventilator for months. Shelton was discharged only a few weeks ago and faces months of rehabilitation; his return to work remains uncertain.

Through those dark times in the past few months, Shelton has had his own Carolina cheerleading squad, including his wife, children and fellow university staffers and family. His brother Brian Shelton, associate director of the undergraduate division in the Moore School of Business, did his best to inject a little levity into what was an otherwise humorless situation. And his sister Sissie Probert, an academic adviser in the College of Nursing, visited him every day in the hospital.

The cheering and support will reach a crescendo Aug. 9 when friends, family and other members of the Carolina community help stage a "Walk, Chad, Walk" event to raise funds to defray his medical bills and to raise awareness of Guillain-Barré syndrome.

"I was told about three times he wasn't going to survive," says his wife, Kit. "But here we are. He had one of the most severe levels of Guillain-Barre that you can develop, so his recovery has been slow."

Probert says the fundraiser will include a 5K walk and fun run and a baseball exhibition that might include a few Carolina baseball players. "The fundraising aspect is needed — they've got about $1.5 million in unpaid medical bills — but a lot of what we want to do is raise awareness of the disorder. It's rare, but it can happen to anyone," she says.

Shelton lost 50 pounds and much of his muscle mass during his illness. Intensive therapy might restore his ability to walk, his wife says.

While rallying around their oldest brother, Probert says she and her siblings have fondly remembered the period of time several years ago when all four of them were employed at Carolina.

"Our mother used to get aggravated if we called her back then and didn't leave a phone message because she would see it was a university number but didn't know which one of us it was," she says with a chuckle. "If Chad can make it back to work, that will mean three of us working at the university again."

What: Walk, Chad, Walk — a fundraiser for Chad Shelton including a 5K walk/run and exhibition baseball game at Brookland-Cayce High School