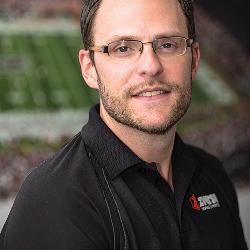 Zverse, the brainchild of 2002 graduate John Carrington, has found its niche in the 3D printing world.

Gamecock football fans watched in awe as Jadeveon Clowney burst through the line and disconnected ball and helmet from Michigan's Vincent Smith on New Year's Day 2013.

The replay video went viral and will forever be remembered by millions of Carolina fans. But "the hit" spurred more than a big bowl win. It inspired alumnus John Carrington to start a new business.

Carrington, who graduated with an advertising degree and business minor in 2002, had spent the past 15 years in e-commerce. Always curious, he had been searching for the next big thing in technology and was intrigued with 3D printing — a technology that transforms an image or photograph into a three-dimensional object. In a flash, Clowney's hit fired Carrington's imagination: 3D printing could be a game-changer.

"The picture and video of the hit were going around the Internet like crazy, and I said, 'If you could make a 3D model of that photo that could sit on your desk or hang on your wall, that'd be worth 3D printing," he says.

Carrington used a photo of the Clowney hit for his first 3D-printed prototype and was astounded by the results. So he tested another theory: Could he print a 3D model of something from only a design? His daughter had drawn a pretty Easter egg on paper, so he created a 3D model using the texture of her drawing and produced her 3D-printed Easter egg.

"I showed it to her, and she just lost her mind. She thought it was magic," he says. "Two minutes after seeing this thing that she never knew existed, she says, 'Daddy, I can draw a stand for the egg, and then you can make it.' And that was all I needed to be able say to myself, 'There's something here. Let me run with this.'"

Carrington self-funded his startup, called Zverse. His first office space? A booth at a local Panera. But once he made several 3D prototypes, he was able to secure more funding. Then, in late spring 2013, one of the world's largest sports marketing firms discovered Zverse and advised him to apply the technology to sports memorabilia. The next step was a no-brainer. Carrington turned to his alma mater, where his idea was met with enthusiasm by USC's director of trademarks and licensing, Ken Corbett.

"When we beat Clemson in football for the fifth time in a row late last November, Zverse created a No. 5 ornament that was a pretty big hit during the holidays," Corbett says. "If you had that same ornament made in the traditional method of a mold and die, it could take months. Timing is everything."

Eric Nichols, USC's associate athletic director for marketing, was another early fan. "I have been fascinated by Zverse since John first introduced me to his products," he says. "I believed in them so much that I endorsed Zverse with fellow colleagues around the country."

Word-of-mouth, long hours and a clear business vision have helped the company grow. Zverse now has licensing agreements with about two dozen colleges and universities, including 10 SEC schools, five of the top 10 schools in football last year and half of the Top 25. This year Zverse will introduce products for each school, and they're already working with Fanatics (the largest e-commerce store for sports) and several retail vendors, such as Barnes & Noble.

But while Zverse does other specialty 3D printing, including architectural modeling, prototyping and items for special occasions, sports marketing is their mainstay.

"We are the first and only company using 3D technology to make officially licensed collegiate memorabilia, and that's a big deal to us," Carrington says. "We hit it at the right time and have the right technology and people to make it happen."

Carrington has been asked if he'll move Zverse to a bigger city, but that's not in his plans. As he points out, the largest manufacturer of 3D printer systems, 3D Systems, is located in Rock Hill, S.C.. Add in a booming aerospace industry taking shape in Charleston, and the sky's the limit.

"You've got Boeing down there, which is one of the largest users of 3D print technology," Carrington says. "We need to be here. There's no benefit to moving. It does us no good to go make stuff in China. We plan to be firmly rooted here and in the shadow of Williams-Brice Stadium, which is cool because it's really what got us started."