Face of the Challenge 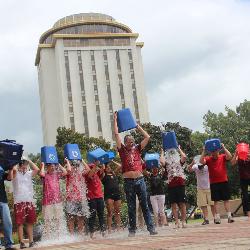 Faculty and staff on the Columbia campus have rallied around Stephen Finger, an economics assistant professor who was diagnosed with ALS last year and continues to teach.

You know it as the Ice Bucket Challenge, the fundraising phenomenon that has taken social media by storm this summer. Stephen Finger knows it more personally, as a tangible sign that people care and are becoming aware of the disease — amyotrophic lateral sclerosis or ALS — that he was diagnosed with early last year. An assistant professor of economics at the University of South Carolina, Finger has, in a sense, become the face of ALS for the Columbia campus. And the Carolina community has rallied around him.

Even the students in Finger's ECON 720 course have joined in, videotaping their collective ice bucket dousing a couple of weeks ago. His colleagues in the economics department and deans from three colleges — public health, engineering and computing, and social work — have gotten soaking wet, as well.

"The Ice Bucket Challenge is a huge gimmick, it's silly," Finger says. "That being said, two million people have done it, acknowledging the existence of ALS. That part of it is not insignificant. That part is unbelievable to the ALS community.

"It's put the disease at the forefront of people's consciousness. People care about what they know. Once they make that connection, they are exceedingly generous and we have seen that with the flood of donations."

Finger was starting his fifth academic year at Carolina in fall 2012 when the initial symptoms of stiffness and weakness in his hands began. By late winter 2013, he had a diagnosis.

"We were horrified by it. In a matter of months, I went from thinking I had a minor issue with my hands, to being told I had a neurodegenerative disease where the life expectancy was two to five years and doctors couldn't do anything to help me," he says. "Once we got past the initial shock, we realized that our lives had to go on. The disease does not change how much I love my family, the enjoyment I get from being with them, or the laughs I share with my friends."

About 5,600 people are diagnosed with ALS every year in the U.S., most between the ages of 40 and 70, but the disease can affect people of all ages and from all walks of life. Only half of all people living with the disease — which affects nerve cells in the brain and spinal cord — live three or more years after diagnosis.

Progression of the disease in Finger's body has been slower than normal thus far. He's still able to drive, and he has continued to teach. He and his wife, Cara, have a 4-year-old daughter and a 2-year-old son. Much of their care and many of the household chores that once were his now fall to his wife.

"The burden of the disease falls as much on her, as with me," Finger says. "She keeps our family moving forward."

"With an illness like this, you re-evaluate what you want to spend your time doing. Is teaching a valuable use of my time? At this point in my life, I've decided that it is. I would rather be doing this than sitting on a sofa at home.

"My department has been incredibly supportive throughout this process. My chair, John McDermott, and my colleagues have made it so that I want to continue."