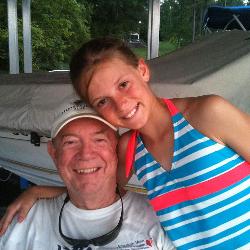 Every day is Saturday

After a 43-year career at UofSC, Jerry Odom is finding more time to enjoy his family and read for pleasure in retirement. He'll receive an honorary doctorate from the university during summer commencement ceremonies.

Jerry Odom, the former executive director of University Foundations who also was a provost, dean, department chair and chemistry professor in a 43-year career at the University of South Carolina, receives an honorary doctorate in science at summer commencement ceremonies. @UofSC Today caught up with Odom to find out what he's been up to since retiring in 2012. Spoiler alert: He's having fun!

Except for your undergraduate and graduate education, you spent all of your professional career at Carolina. What does it mean for you personally that the university is recognizing your service with an honorary degree? I have been involved with USC commencements for many years and, as provost, had the pleasure and privilege of introducing honorary degree recipients. I was also able to have meaningful discussions with them and was impressed with their significant accomplishments. To be recognized with an honorary degree by the University of South Carolina where I spent my entire academic career of 43 years is extremely satisfying and even humbling. Even more humbling are the character and accomplishments of my fellow recipients at this commencement with whom I will share the stage.

You've attended many past commencement ceremonies as a professor, college dean and as provost. What does it feel like to be a degree recipient and special guest at the summer 2014 commencement? It is hard to describe the feeling I had when I received a letter from Amy Stone, secretary of the Board of Trustees, inviting me on behalf of the board and President Harris Pastides to receive an honorary degree. I suppose a mixture of shock, surprise, pride and excitement could describe the moment. Since then, I have become more excited and feel tremendously honored by this degree and all the events surrounding it. It means that my contributions to USC as a faculty member and administrator are being recognized by the university community. That is a feeling of true satisfaction.

You worked at Carolina in one capacity or another for 43 years. What have you been doing the past two years in retirement? I have truly enjoyed my retirement where every day is Saturday. I wasn't sure I could be happy away from the university, but I have continued to stay busy and satisfied. I have more time to spend with my wife, Toni, and my children, Ben and Jules, and my three grandchildren, William, Eliza and John David. I also am able to spend more time at our lake home at Lake Wateree and to read for pleasure. Throughout my career at USC, I enjoyed playing racquetball with my colleagues (especially former President John Palms), but my knees finally gave out. I turned to tennis and have been fortunate to play on teams that went to the state championships in 2011, 2012 and 2013. One team won the state and went on to win the Southeast sectional in Dothan, Ala. My membership on the Palmetto Health Richland Board, the Palmetto Health System Board and on the national EPSCoR Foundation, which promotes university research in 30 different states, has kept me occupied. I have also done some consulting. In other words, idle time has not been a luxury - yet!

If you had the opportunity to say one thing to all of the graduates, what would it be? I would say "Live life to the fullest. We do not get to choose how long we will be here. Pay as much attention as possible to family and friends, for those relationships are the true treasures in life."