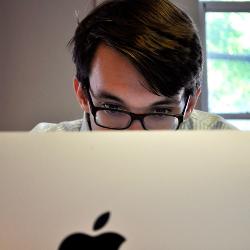 How did you spend your summer break? Some Carolinians studied abroad or took challenging internships at big companies. Around here, summer isn't just a time away from campus or a break from a full class schedule. For two University of South Carolina students, summer was the perfect time to launch a business.

Why software to help graphic designers? Price and Askins first thought of the idea while working at The Daily Gamecock, the university's student-run newspaper. Their experience as designers and photographers for the newspaper helped spur the idea for what would become Krit, playing off the word "critique."

"The original idea for Krit actually came about because I was trying to learn about design, and was having trouble getting feedback on design work I was doing. I would create a design and email it to Austin and other designers at the paper, but this was slow and it was hard for them to provide specific feedback in an email," Askins says. "So our original idea was to build on online community where designers could upload works-in-progress and get feedback from their peers."

Initially the group asked other designers and freelancers about what problems they encountered. The idea for the app evolved from there.

"I'm a designer and I've done some freelance work. We've all worked around designers," says Price, who graduated in May from the College of Mass Communications and Information Studies. "If we were going to build software for a group of people, that was really the group we knew best."

The trio applied to work with UofSC's Tminus6 accelerator program to get the program up and running. Without that guidance, they say, Krit might not have happened.

"Tminus6 has been incredibly helpful for us. There's no way we would be where we are today without the accelerator program," Askins said. "Tminus6 has not only provided us with startup capital, but also mentorship, legal counsel, hosting and access to tons of other resources that have helped us get Krit off the ground."

They did just that this summer, launching the beta version of the software and gathering feedback. With more than 200 customers and others on a waiting list, the startup is on its way.

The guys say it's been a lot of work – long hours and meeting with numerous potential customers – but well worth it.

"It is a chance to learn a lot and make some people's work lives a lot easier," says Brower. "It's been an adventure. It's a lot of work but it's rewarding."

Askins says launching the business while still in college meant the perfect timing.

"We do it because we love it, and this is what we ultimately want to do so why not do it now?" he says. "We're young, we can afford to take some risks, so we're taking them."

Price had a little more riding on the startup with a diploma in hand.

"I always thought it would be cool to launch a business but I wasn't counting on it. I was like if we get into the accelerator, I'm just going to go for it and that will be my plans after graduation. If not, I had a few places lined up to apply to for jobs," he says. "I'm really glad it worked out and option A was the way to go."

Find out more about the group's company, Krit. Tminus6 is a public/private venture powered by a fantastic collaboration between the university's Startup Center, the USC/Columbia Technology Incubator and a group of local tech entrepreneurs and investors.