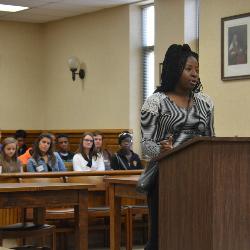 The School of Law launched its Middle School Mentoring Program and plans to make it an ongoing outreach.

The last thing most 14-year-olds want to do is stand before a judge. But eighth-grader Danielle Rice and 39 of her middle school peers relished the opportunity this past spring.

Rice was one of 40 students from four Midlands-area middle schools (W.A. Perry, Hopkins, Heyward Gibbes and Alcorn) who participated in the University of South Carolina School of Law's first-ever Middle School Mentoring Program. It was chance for them to learn how the law is relevant to their daily lives.

A team that included eight University of South Carolina law students built the program, which included one-on-one mentoring and educational workshops that helped the middle school students learn how to build a case and advocate for a cause. The program culminated with oral arguments before a real judge. More than 40 law students served as mentors, while principals from each of the participating middle schools selected 10 students to take part in the program.

Beginning this past January, the middle-schoolers came to Carolina to meet with their mentors for the first time and learn about the problem they would focus on over the coming months: Should public school uniforms be mandatory? On the first day of spring, arguments in hand, the students sat in the second-floor law school courtroom and waited their turn to go before Judge Michelle Childs. A 2010 Liberty Fellow as well as a 1991 law school alumna, Childs not only heard the arguments but also provided each student with tailored feedback.

"It was really cool that we got to present to a real judge in a real courtroom," said Rice, who was the first to present her case, while her mentor and other participants watched. "That's something most kids our age definitely don't get a chance to do."

"I was shocked at how attentive and mature the kids were, and I can see many of them going on to become lawyers. There was a lot of promise in that courtroom," said Danielle Holley-Walker, dean of Howard University's School of Law and a former associate dean at Carolina's law school who helped launch the program.

Law student mentors and middle-schoolers agreed they gained tremendously from this experience.

"One of my favorite parts of this is getting to meet all of these new people. I have new friends that care about the same things I do," Rice said.

"I'm happy that we are able to help put the kids on a path that encourages them to pursue higher education," said second-year student Cassandra Huggins. "I like that we found a simple topic that involves their issues and also puts an interesting spin on the law."

While the Middle School Mentoring program has concluded for this semester, there are high hopes for the future. Visiting assistant professor Claire Raj, who ran a similar program at Howard University School of Law, will take the reins of the program and even explore the potential for expansion with a future summer camp program.

"We need to start preparing these kids for the future as early as middle school. We are opening a door of opportunity and hoping they walk through it," Raj said.

To learn how you can support programs like Middle School Mentoring and the UofSC School of Law, visit Carolina's Promise.